I don't recall ever having a September this wet. The weather has set in and been pretty relentless. In fact it was raining so hard this morning I got two thirds of the way to where I was going to hunt and the wind and rain forced me to turn around and drive 1 and 1/2 hour back to the house. The rain isn't hurting anything, but it is hampering my quality hours on the hill with Jake.
Yesterday, the rain was a little lighter so Jake and I stayed on the hill until I found it difficult to stand on the stilts formed by the mud building up on my boots. It was breezy but Jake figured out how to use that wind to find birds. He had a great day. His pointing is already like a mature dog but his retrieving was suspect. By the end of the day he was bringing the bird right to me without a word being said. Chasing a wounded bird up and down a hill helped with his training. The first run down the hill chasing the bird was tough, but after putting the bird down twice and starting the process all over again he finally figured out that he needed to get the bird to me in order to get a short break. He got to me and put his head on top of the bird until I grabbed it. We'll work on actually getting the bird into my hand if needed.
I didn't pack a camera because of the wet conditions as well as still being in a training process but I could have taken some great photos. I got home and took a tailgate picture between storms. I know many people don't like tailgate photos but I do. The birds are not about me but what my dog has accomplished. I'm as proud of the dog as I was of my children graduating, winning a trophy, etc. and that's why I like to see those pictures. 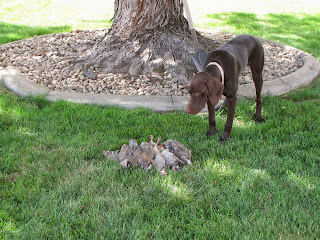 Not a limit but his best day yet with all six birds pointed and retrieved. The truth be it could have been a limit if the shooter would have held up his end.
We're going to try a couple different spots in Idaho this week and then head for Oregon Saturday after Conner's football game. We'll stay over there for four or five days and see how the bird numbers compare to Idaho. So far Jake and I have hunted six different locations in Idaho and have found different results in each. Some show little sign of birds and some show average amounts. No place has shown that banner year like we all like but also no place seems devoid of alectoris chukar.
Good luck hunting and if you're in eastern Oregon next week and see my truck "Tuckota" stop by and swap some stories.
Posted by larry szurgot at 9:21 AM

Good to hear it's somewhat normal in your neck of the woods, I've heard the same kind of scattered reports in Nevada so far, but we don't open for another week and a half. Good luck in Oregon.

Sounds like you are doing better than most folks out there. Says a lot about the good job Jake is doing for you despite it being his first year.Good luck in Oregon.
Alan

Thanks to both of you. Today was a prime example of what the year is probably going to be like. Jake and I hunted for three hours without seeing a bird but found six covey's in the next 1 and 1/2 hour. Covey's weren't huge but they're out there to be found.