I wish the news was that I was back out on the hill with Jake. Not so, but maybe this is the second best thing.

I'm getting some reports and stories from some that are positive for you chukar hunters. Yes, there are still birds out there. Although Matt Hutt didn't have much luck on his outings( he admits that they were just short workout hunts for Jack), 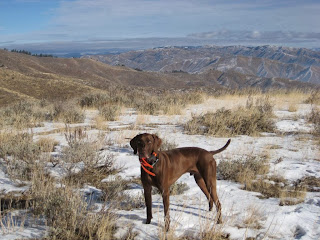 he's still thinking positive and looking forward to hunting some areas that have more birds. I never get tired of looking at his dog, Jack. No, he's not a GSP but a PP.
The Nevada area must still have some pretty good hunting as Abbey, a nine year old pointer proves in this picture. 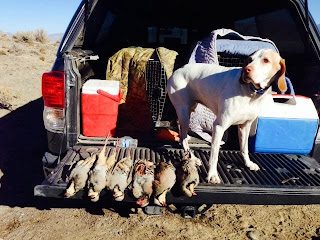 Her hunting partner, Joe Corolla, says the hunting has been pretty lean but finding birds is possible with good dogs. He mentioned all his great dogs of the past and what they have meant to him. I believe he and Abbey  know what they are talking about.

Jordan Oyler came through for the Utah area. His stories of seeing up to 100 birds in a day do my heart good. How he got to the birds didn't make my knee feel quite so good, though. Snow chains on your boots is a sure sign of a dedicated chukar hunter. He reported places that had 18 inches of snow and the chukar tracks were thick. Amazing how those birds know where to be, but vacate when need be. But old pros like Jordan's ol shorthair 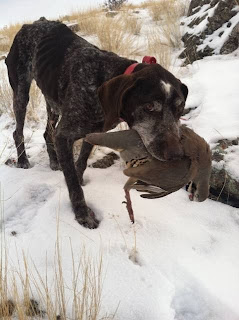 always seem to get the job done. Jordan's days quite often end like this with hard work and good dogs. 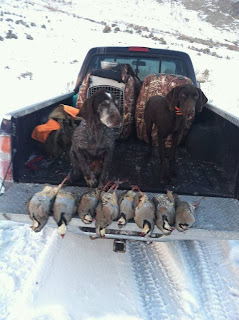 Eastern Oregon is also producing birds. My hunting partner Greg Allen called me Sunday for his report. He has been hunting with two girls mostly this year. Trudi is six and Katie has just turned a year old. Greg says he's finding birds and getting some real acceptable dog work, Katie is learning to honor and having a little bit of a problem with crippled birds. The same one most of us have. Dropping the bird too soon and the chase begins again. Greg says with training aspect he's not killing as many birds as he could but the possibilities are there for a limit. Even with the birds being pretty wild he's coming home with 4 birds or better a day. 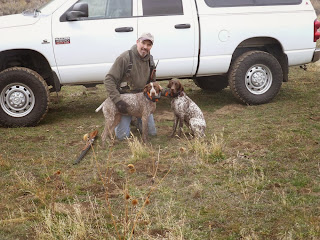 For the more adventurous, Allan Howell in Homer Alaska says there are plenty of ptarmigan to shoot for those who like to travel on snowshoes or snow machine. The real plus of chasing birds up there this time of year is the big bears are sleeping. I mean the BIG bears. Maybe that's why Allan hunts with a GSP that weighs 110 lbs. That isn't a misprint and Mays looks to be in pretty darn good shape.
Bottom line is, the birds are out there. These guys prove it. With only 45 days left in the season and holidays taking some of them up, you'd better get those pups into as much action as possible. It would be a great Christmas present to them. My Christmas present was Jake learning to read so that I could relay all this information to you.
Posted by larry szurgot at 3:50 PM