It's about the dogs

It's been a pretty grueling month. I finally got out two days ago. It wasn't a chukar hunt but it just as well have been. Even knowing that I'd be lucky to last an hour I was as excited to be out there. I normally don't care to hunt quail only because of the terrain they like to inhabit. Thick brushy draws where they can sit up in the trees and scoff at the dogs. Dogs find it hard to hold point as the birds jump from branch to branch. But, today I felt it was just a treat to be out there with Jake.

There's a spot I chukar hunt once in a while and usually find quail at the base of the mountain. I was pleasingly surprised when I got there to find almost no snow. This time of the year usually has snow in the draws. The quail were there also. Jake had his first point within ten minutes of starting up the draw. I thought he had gone nuts because he was pointing a place I didn't figure on seeing birds. 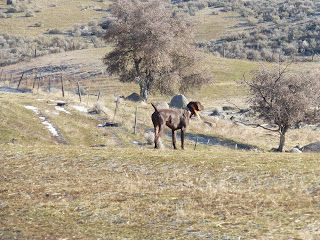 I crested the knoll he was standing on and there were about thirty of the little buggers sprinting up the draw. They soon took flight and picked up another bunch about the same size. The turbo's fired up in Jake and he began covering the slope at like there was no tomorrow. He bumped several birds but also had some great points from quail hiding in the smallest clump of cheat. 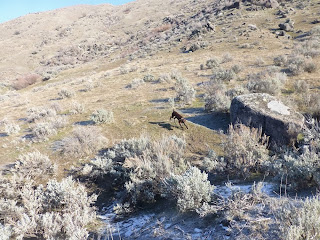 I shot well and Jake was always in a hurry to get the bird back to me and spit it out. I don't think he cares for the fine feathers on quail. 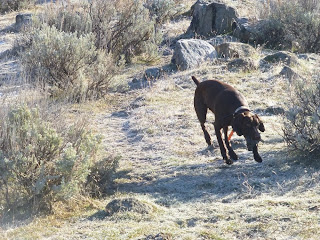 Several times Jake would stop and listen to the chukars calling from way up the hill. I wanted to oblige him and head up after them but I knew better. One good tumble at this stage could undo all the good the Dr. has performed. So we stayed on the lower path and Jake did his thing. 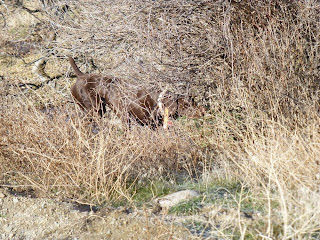 Never would I have imagined being on the hill Dec. 28th after having a knee replacement the 4th of the same month. The Dr. might not be to happy with me, but God it felt good to be with Jake on the mountain. Even if it meant staying low. 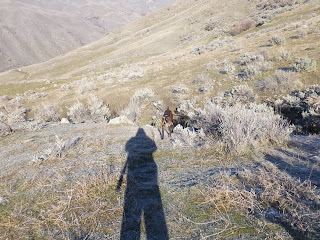 The last month has been forever for Jake and myself, but I endured it mainly because of a few bird hunters that kept me posted on how things were out there. There were some success stories and some without as much success. I guess you can say all the stories kind of kept me in touch with the mountains.

I appreciate all the guys that kept me posted and as I look back at the last month I see what we all had in common. The love of our dogs. Not once was there a picture or a story that didn't something to do with a dog. Especially the young ones. They were stories about the great 400 yard retrieve from the pup that had to lay the bird down a half dozen times to catch his breath or how the pup finally learned how to honor. There was also the picture and story of the grey muzzled dog with what was probably his last limit of birds because the arthritis was taking him down. At twelve years old he and his master sat on the hill for a long time remembering all the good years they had had together. For all those stories and pictures, I thank you.

My little contribution a learning experience that Jake provided two days ago. I expected him to be pretty wild and still be out there 2 to 3 hundred yards because that's how we always hunt but instead he became a 100 yard dog and usually even closer. I don't know if it was because the birds were usually in thicker country or because I was so slow that he adjusted for me. To be honest, I don't really care what the reason. It was just a pleasure to hunt behind my dog who loves to hunt for me.

A side note. I just got a letter from one of the hunters that has been entertaining me with his stories for the last month. Jordan lost one of his dog hunting companions this weekend. Aggie was a great partner to Jordan and his wife. I hope you will all join me and say a prayer for the Oyler families loss.
Posted by larry szurgot at 5:18 PM

Larry,
I'll bet you did have a great time with Jake.Its hard to stay down for very long despite knowing you should. Sounds like Jake adjusted his range to suit the situation. I noticed this with my dog the past year or so. My knee actually got better,for how long I don't know. Sounds like yours is on the mend. Did Barb's eyes raise when you went hunting? My wife always says "Do you think thats wise?" Since I'm not known for wise decisions lately,I go anyway. I have stayed home lately though as I would rather have the surgery later on. Sounds like it did the trick for you. I'm sure Jake will go anytime you want to.Have fun.
Alan

Alan, I got more than raised eyebrows from Barb and my daughter, who is a nurse. I also did my first therapy with the weights and a hard driving therapist today. Of course I had Jake with me in the truck. When I introduced Jake to the therapist and told him about our outing Saturday he also said that probably wasn't too smart. I explained to him about the smarts of us upland hunters and he impressed upon me that Thursdays workout was going to be even harder than today. I guess that's why we live life just one day at a time.

Good for you for doing what's best for your mental health, Larry! Glad to know you're on the way back up the hill. Keep it up!