Getting schooled by the chukars

Because of the flu and the cold snap that hit over the last week, I've been stuck sitting by the fire for the last week. Between Jake lying in the bedroom watching quail run up and down the driveway and Conner calling wondering when we were going out again, I was manipulated into giving it a go today. 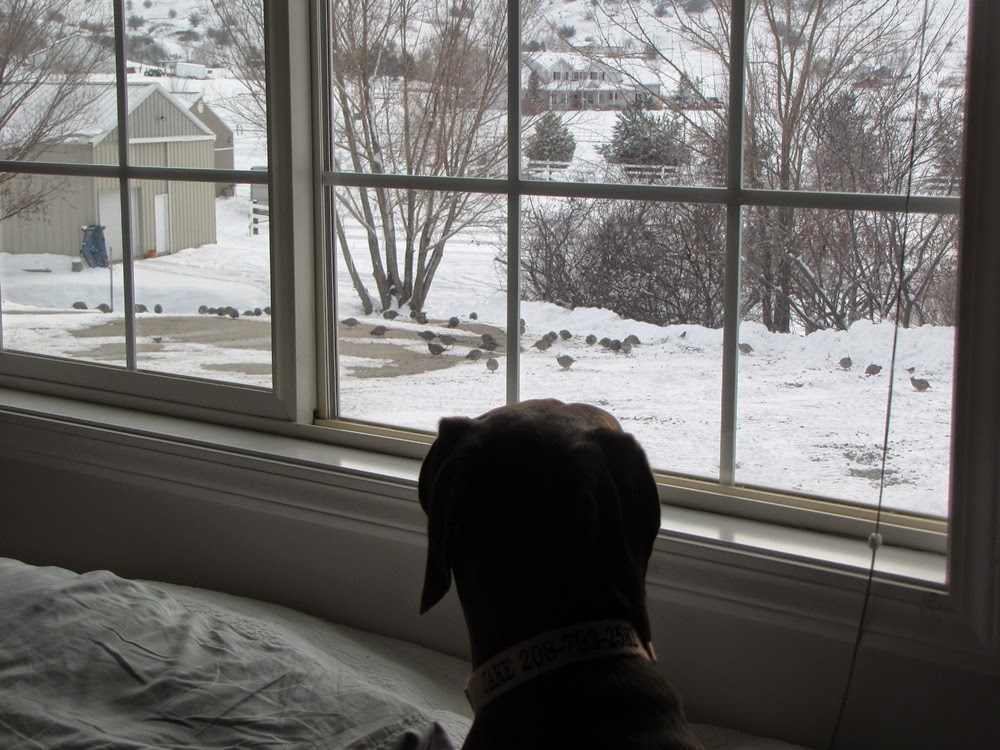 Once Conner and I parted ways from Greg, Conner and Jake's enthusiasm carried us uphill through the snow. As we hiked through the four inches of snow up the draw, Jake twice followed his nose up the burnt off slope following the scent of running birds. Both times the birds flushed, with a little help from Jake. He was about 300 yards up the hill and there was no way on this day I was going to get up there anyway. After gaining 1000 feet in elevation, we cut back on the hillside and worked our way up to the ridge. After we got to the top I was disappointed to find the snow was even deeper on top with no bird sign. I knew the south side of the ridge should be burnt off so we headed south. As we reached the burnt off slope, my Astro suddenly let me be aware that Jake was on point 286 yards to the north. When we caught up to Jake on point I remarked that I didn't really want to go down there even though I knew we had to. Conner suggested he go down while I wait up high and I agreed. What a great kid. 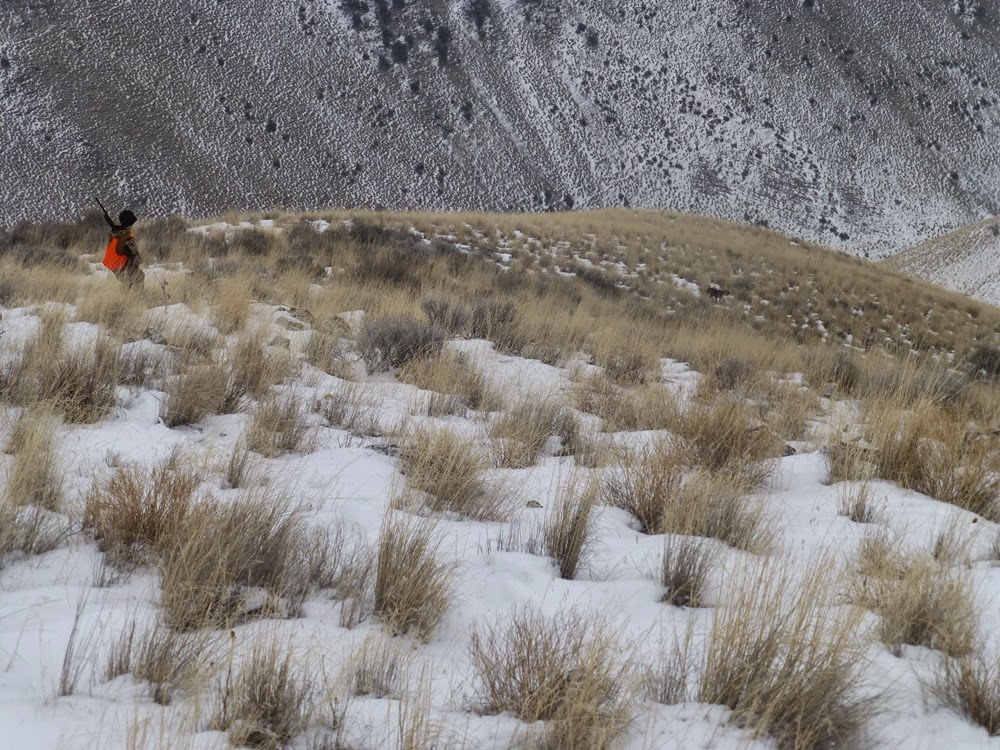 I knew the birds would probably flush across the canyon and light on that steep ridge you can see behind Conner, and they did at Conner's flush and shot. Luckily a few of them broke left and flew around the ridge we were on. The snow was a little deeper where they went but at least we could walk there. 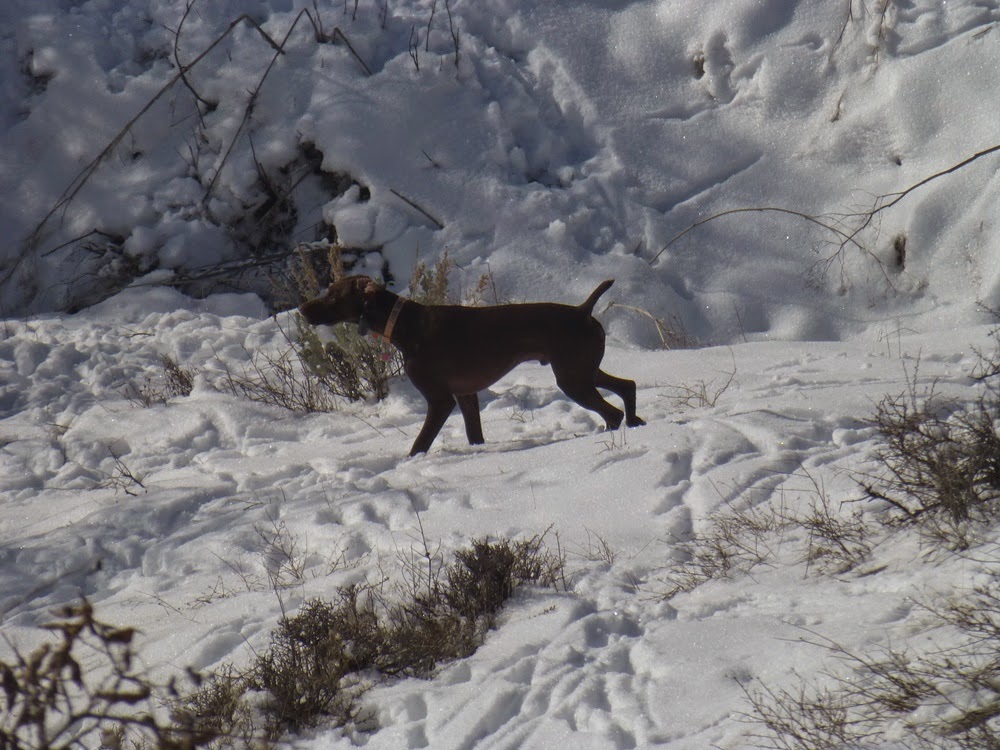 Although struggling for footing, we got in on a few points and somehow every once in a while a bird would even fall at the sound of our firing. 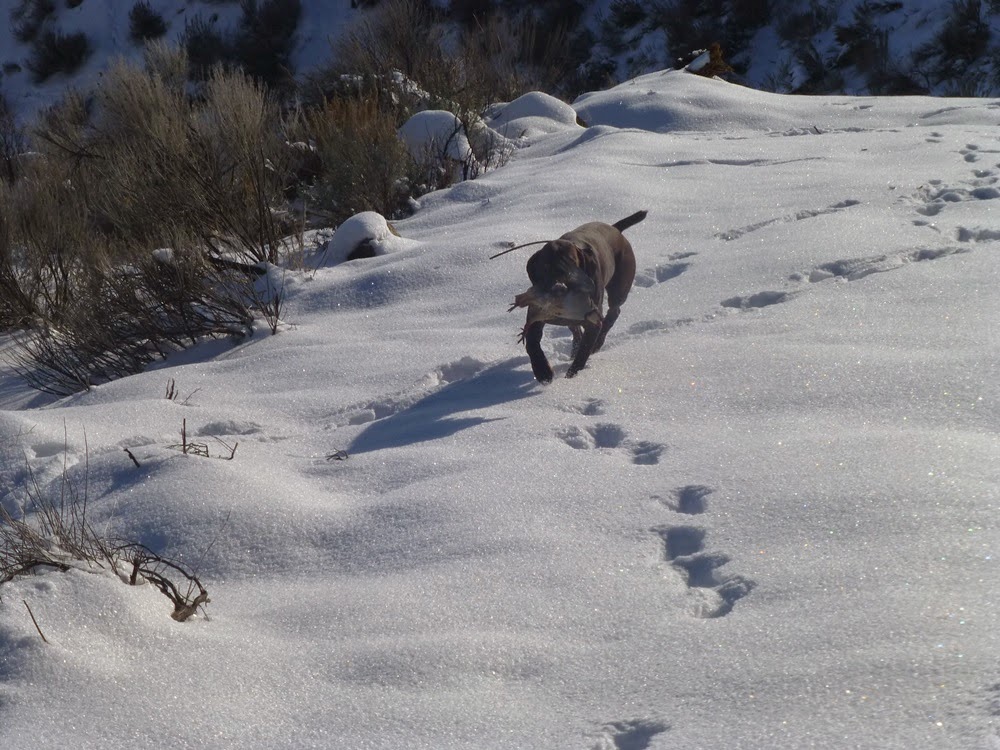 We were lucky enough to catch a few birds in the deep stuff that would stay long enough for some shooting but the numbers were fewer and they all retreated to the south side at flight. 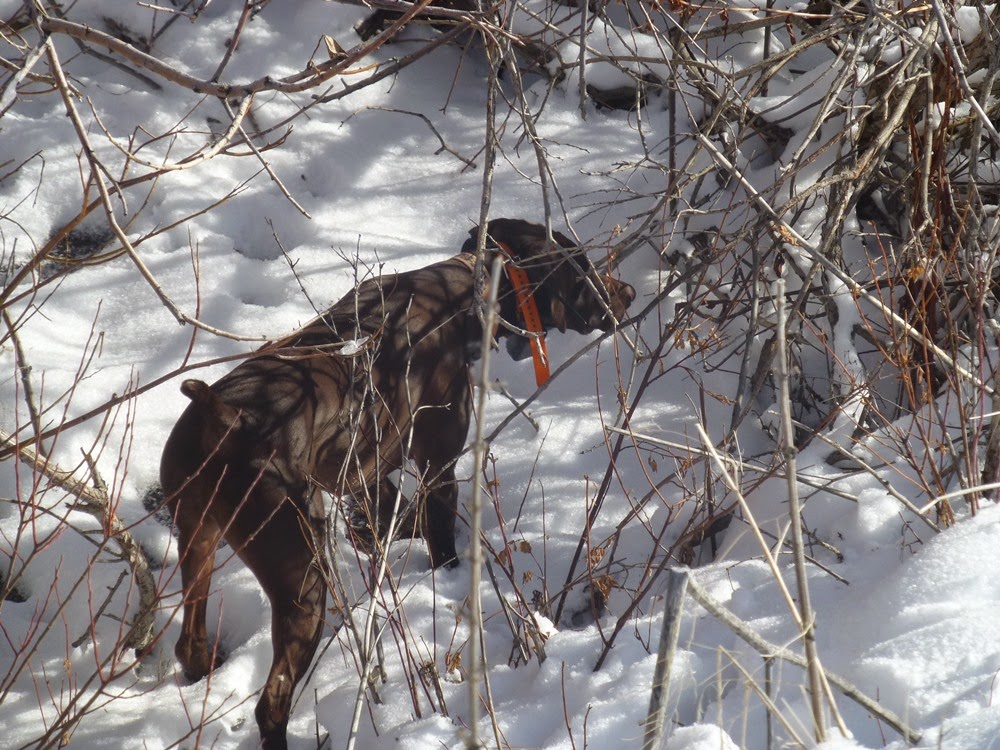 We didn't know it at the time, but any of these easier to get to points were going to be our only equalizers for the day. We should have taken more advantage of some of these easier shots because the chukars were about to give us some valuable lessons on side hilling. 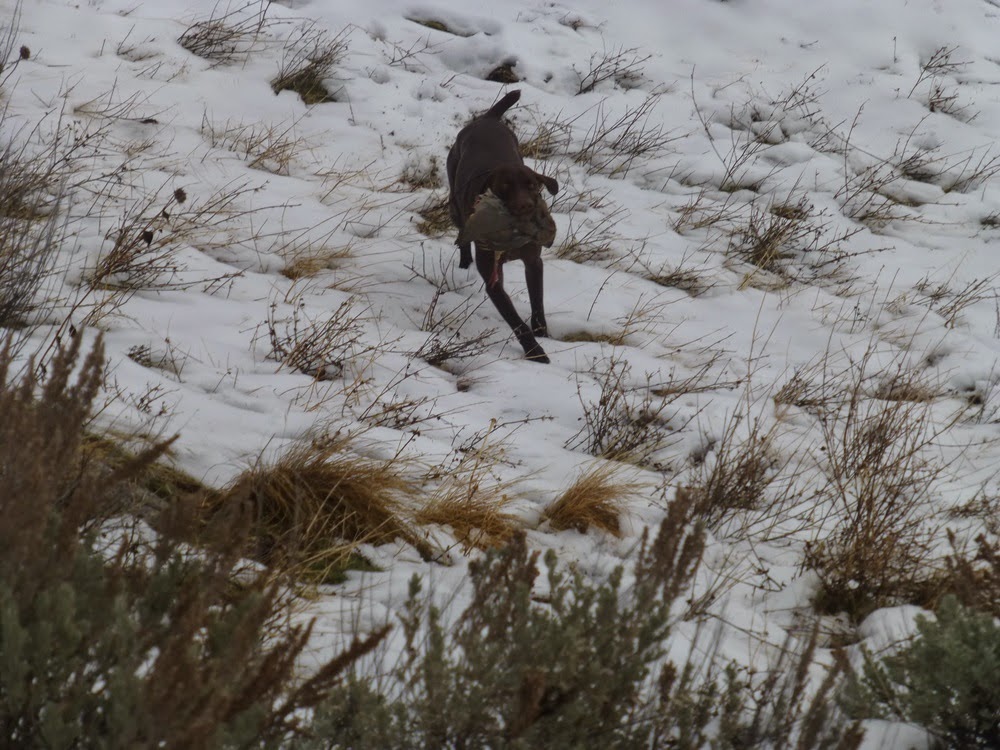 We were on the trail of several covey of chukar's that were about to humiliate us. Yes, there would be less snow but the ground would also be more frozen and steeper. 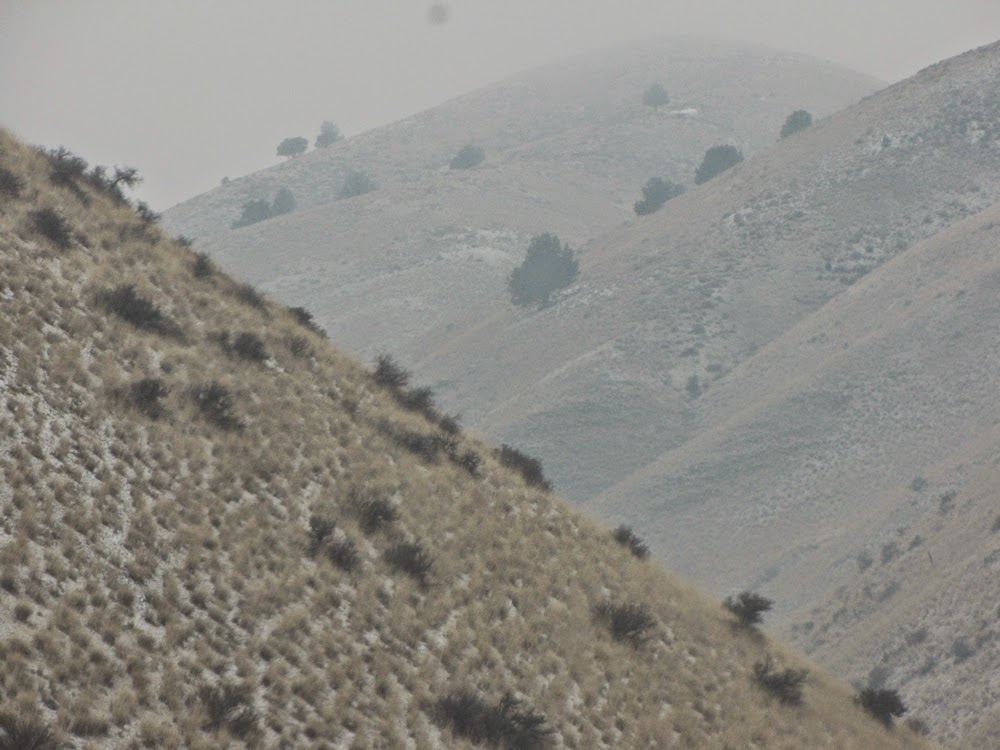 For the next two hours we chased the birds around these frozen slopes. Jake had several points  and even the ones that were on the same level as Conner and I were almost impossible to get to without falling several times. Although we got to shoot some lead at the birds, the only damage done was to our guns and bodies. We ended up with 8 solid points across this slope without knocking a feather from a bird. We could see birds running up the slopes, but we couldn't find a foot hold. Luckily cheat and bunch grass has deep roots so we had something to cling to. I don't know how many times we fell on that mountain but I know we were both celebrating when we finally came across a game trail heading down. Of course the chukars kept  taunting us to return up the hill but, the only one willing was Jake. It took a while for him to retreat with Conner and I but he finally did.

After we reached the warmth of the truck and waited for Greg, Conner and I watched the chukars  running across the slopes through the binoculars.  Conner was in agreement with me that there was no way that hunters would ever do much damage to the chukar populations. It takes maybe three seconds to be out of range and another ten to be on another mountain.

I believe in fair play, so I'll wait until we have another warm spell that might at least make some of the mountain hospitable. Chukars don't know how to play fair and are only concerned with survival. You'd think after chasing these birds many hundreds of times I'd have it figured out, but they seem to give me more education each time I pursue them. Well, I'll see how many more times I can be schooled before January 31.

Posted by larry szurgot at 6:24 PM