Last week, before the fog came, Jake and I had one of those fantastic days together. It was a blue bird day and the chukars were cooperating real well. I got lot's of camera shot's of Jake in action and got a lot of shooting action in the process.

For most of Jake's 24 miles of hunting we were accompanied by what I think was a prairie falcon. The falcon traveled everywhere that Jake went and once in a while would take a break on a rock outcropping or sage. I found myself wishing I could watch Jake through the birds eyes. We all get to see our dog's on point over the birds 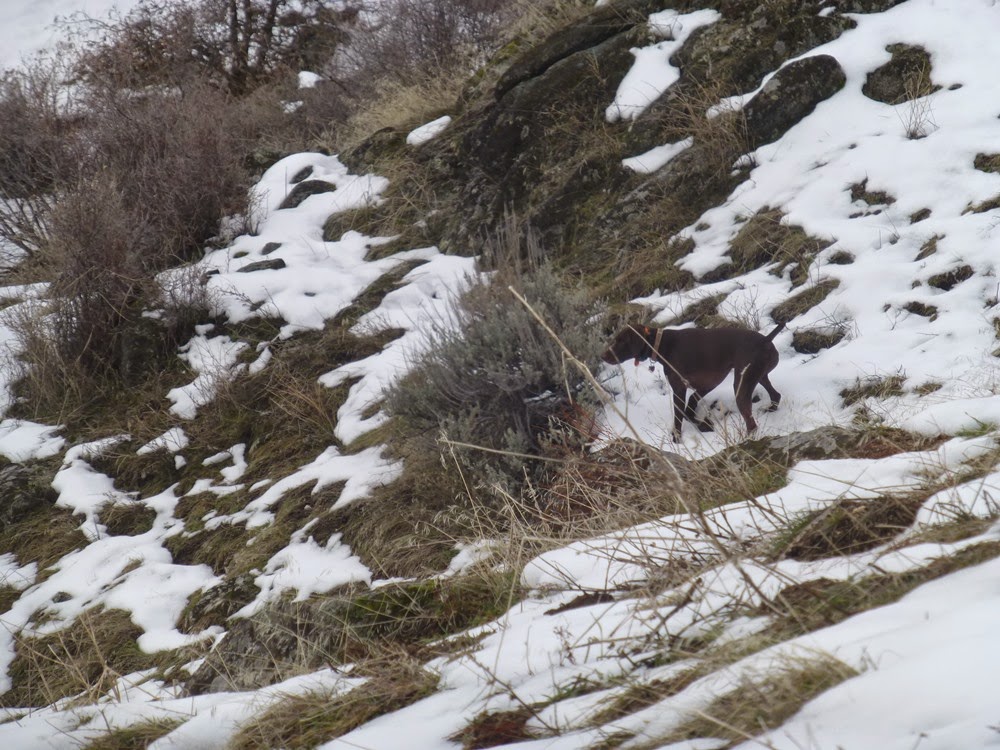 and watch great retrieves when we finally shoot straight, 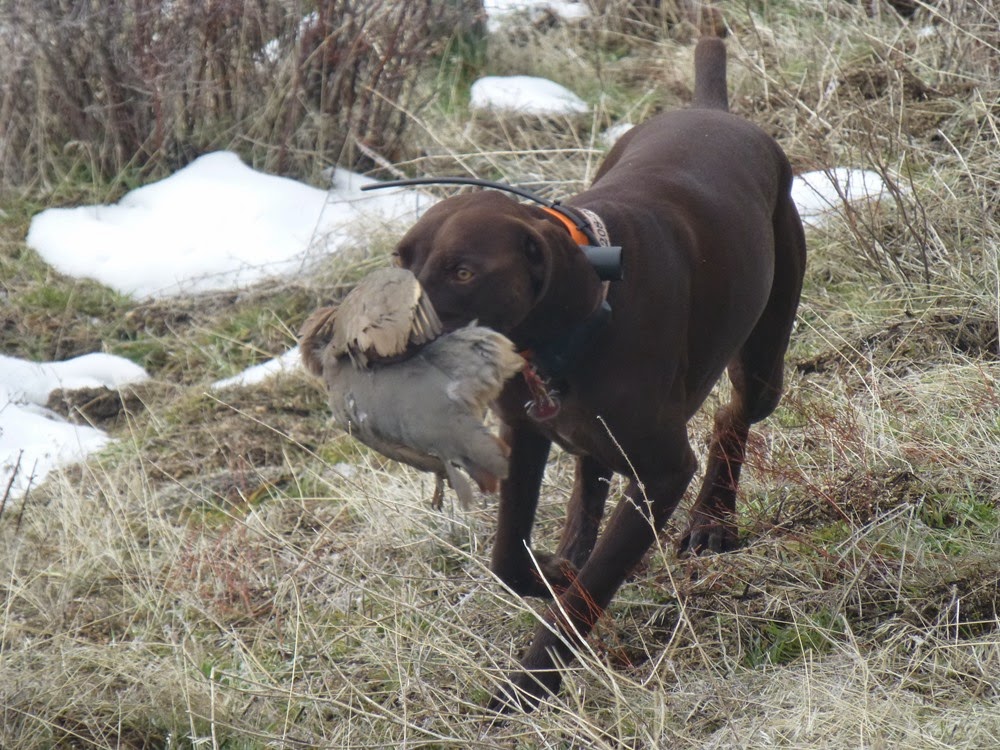 but we seldom get to see the work and action of the dog before the point. Chukar hunting is usually on steep terrain with lot's of pockets to help hide dogs as they pursue their prey. In my case, Jake is usually out between 100 and 300 yards doing his thing. At least 75 % of the time he is out of my sight when I realize he is on point and I head toward him.

Watching the prairie falcon following Jake in hopes of takimg a flushed bird from the air was impressive. I could only imagine what it was seeing. The beauty of a dog racing through the rocky terrain without breaking stride and changing directions as quickly as the wind changes. The falcon could see which way the wind was blowing by the way Jake would top over a ridge and then head into a draw with his head high. There were times when the bird would circle upwards as if to getting ready to dive and I had to wonder if Jake had slowed his pace smelling the scent of chukars. Twice the falcon landed high on a brush and shortly after my Astro let me know Jake was on point.

Through the falcon's eyes I could possibly interpret Jake's actions. How one moment he's headed at mach 1 to my left and seconds later on point to my right. I would love to see what actually happens when Jake tops over the ridge 200 yards away and locks up shortly there after. Those times when a dog follows the scent of running birds straight up the hill and there is a wild flush instead of a point, would be confirmed as to what really happened from the falcon's eyes.

We've all seen our dog's make great retrieves but imagine what the falcon's see. They could probably produce a funniest video of dog's doing accidental flips on the steep hill while trying to catch a chukar that suddenly turns directions.

A birds eye view would also be educational for the hunter. How often have we wondered how our dog's missed that covey of birds? A birds eye view also gets the falcon a meal or two. It didn't happen on this day, but I have seen hawks eating a dead bird I have shot but the dog failed to find. I have also used the birds eye view to help me find birds. Sometimes when you see a hawk circling and occasionally making a dive towards a hill, it pays off to head in that direction and find the birds that wouldn't flush for the hawk but held tight for the dog in spite of the hawk.

Like I said, Jake and I had a great day 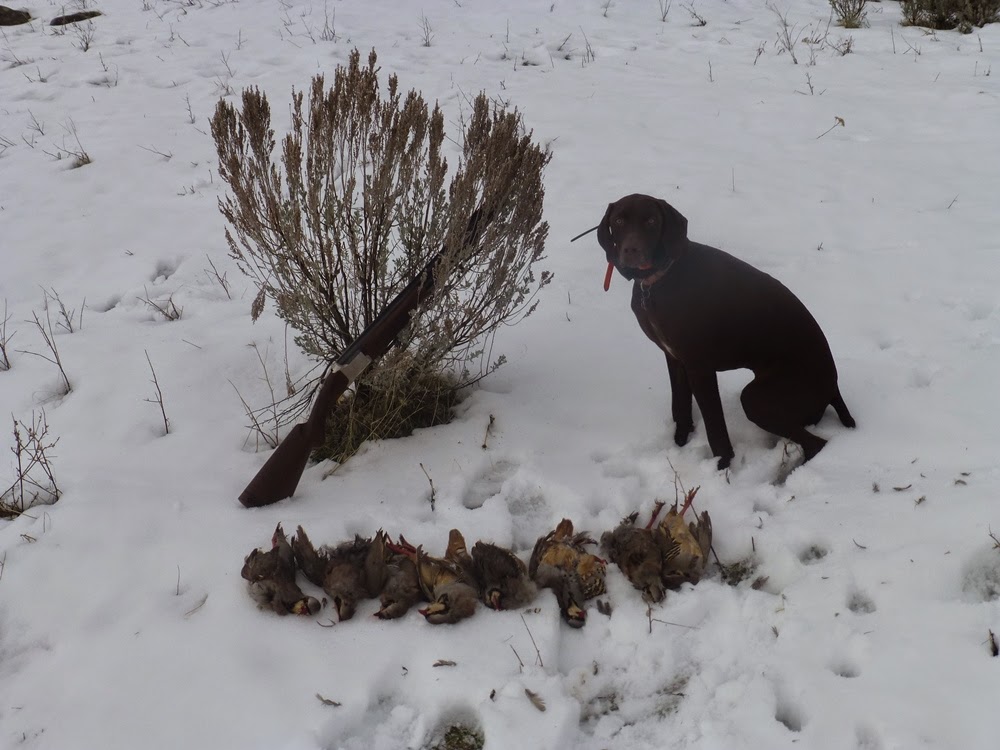 but it would have been that much better to see what the falcon saw.

The next day the fog rolled in. It has stuck around for four days now and neither the predatory birds or I are getting to see much. Jake's nose is still telling me they are out there, but even with his point I only get to hear the flush. 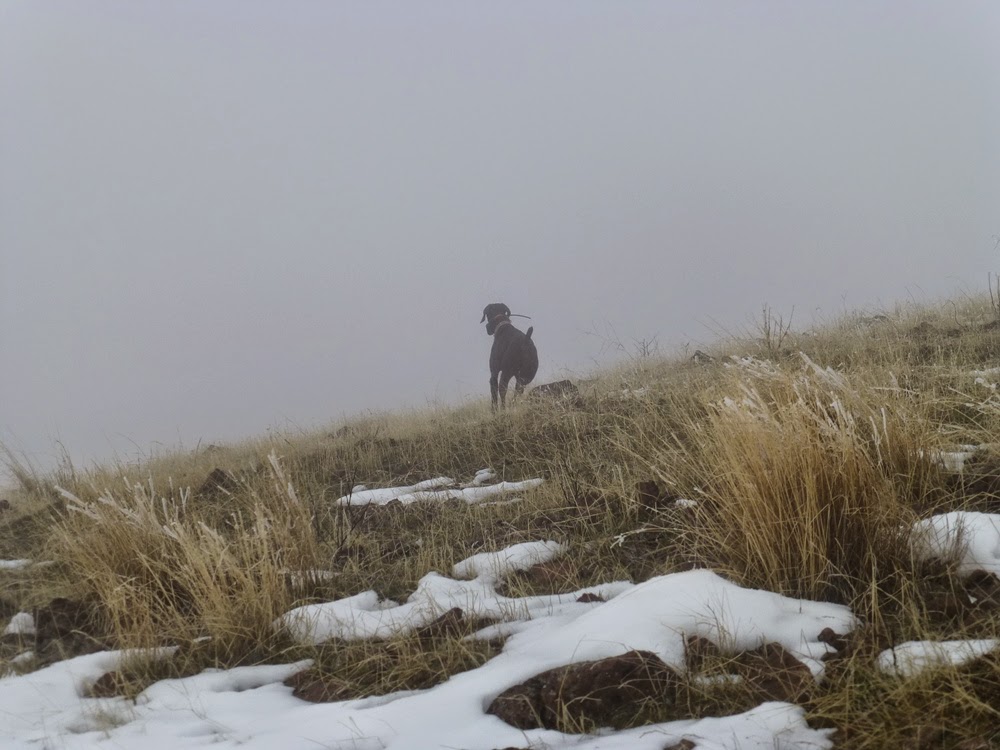 Hurry up, blue bird days, and return to our skies. There are only twenty days left in the season.
Posted by larry szurgot at 11:52 AM

Larry,
Thanks for posting. One of the bright parts of my day is to pull up your blog and see what you and Jake have been doing. I've watched Eagles try to take a pheasant on the flush here and the birds have learned to run rather than fly. We will go for a hunt next Sunday and hope we can locate some ptarmigan. My oldest daughter will be going and hopefully Kate with her cam. Its always hit and miss but we will take a portion of land each trip and find birds one of these times.Keep having fun.
Alan and Mays

Thanks Alan,
I hope you and your daughter have a great hunt and Kate gets some fun action with the camera. I have to confess to enjoying March and April almost as much as the hunting season just because of the camera. Maybe this year I'll do a little more with the a movie camera like Kate. Then, I'll have to learn how to post it.

That is awesome, love that. One of my favorite hunts from all time was an elk hunt in the Gravelly mtns in Montana. We were tracking a bachelor herd in the snow and found not only were we following that meat, but a wolf pack and a mountain lion. Truly a "paleo" day!

I too have taken notice of Cooper's hawks over quail I'm on. They ain't stupid.

Go pro or a camera like it and a dog attachment. Jake would be a great candidate for this as he is very steady on point from what I have read. Get a Jakes eye view and pick up some awesome sounds and video as he is on point up the hill or over the knob from you. See what he sees.

Need to carry 2 or 3, 32 gig sd cards and 3 batteries. Both last about 2 hours in the cool weather. There would be some editing of the running as it may make us car sick to watch it, but the steady points for 5-10 minutes would be amazing. Could be something to look into for some hunts next year. Spring, summer would be a good time to test it out on Jake to make sure he is ok with the attachment and test runs on how it works around the house. Please watch a few YouTube videos of dogs with the attachment and see if it is something to consider. The Jake chukar cam. Could be a social media sensation, especially if he has some awesome retrieves on camera pointing and then retrieving the birds into your grandsons hands. Not an inexpensive proposition, but the cool factor is a 10 out of 10 if it works.