How it really is

After the "big guys" last blog, I decided I'd better chime in and let you know how it really is. Sure, I broke point and moved in behind him. I knew he hadn't a clue of where the birds were and I had to reinforce his confidence so I was just reestablishing my point and staying clear of the muzzle blast.

After two years being in the truck with him and his other human partners and listening to their stories, I feel it my duty to report to the rest of you chukar dogs the real story. Most of you can probably relate. First of all, the "big guy" is always posting pictures of me and telling some way out story about how tough it was. He mentions how far away or how steep it was for him or other similar complaints to make you feel how hard he worked to get there. Well let me say, this is poppy cock. I go about four times as far as him on an average hunt and I only have two times the legs.

The only reason I'm in all of the pictures is because "selfies" don't show very much when we're on the mountain. I must admit that I am a good looking son of a bitch. 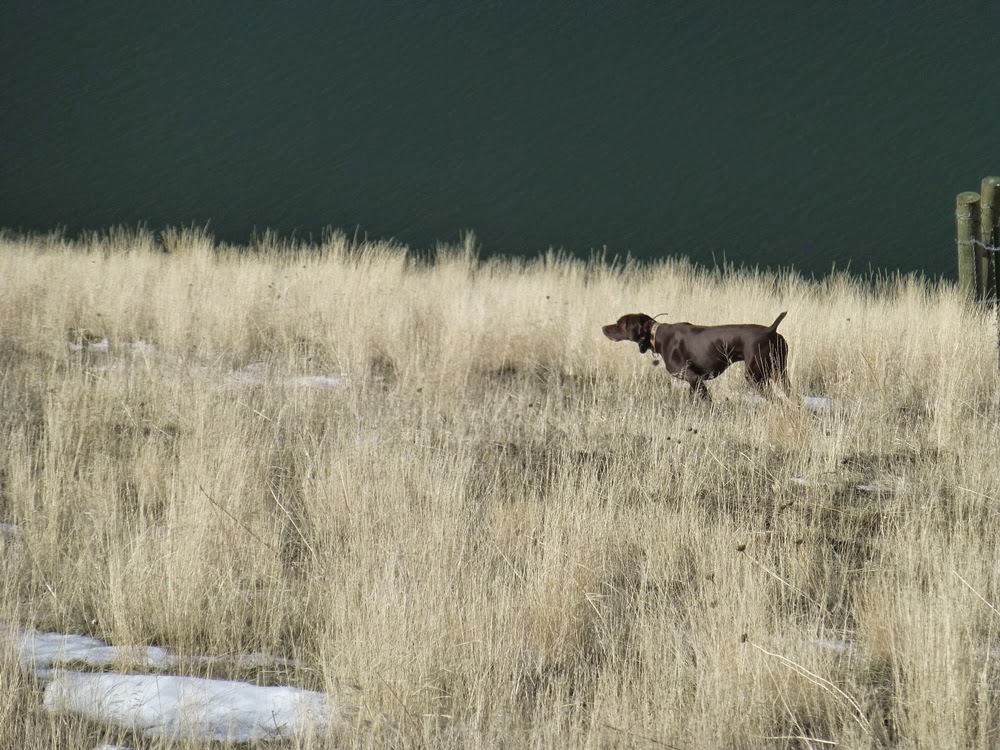 I use those words in a different way than the "big guy" does. The bitches name is Penny, my mom.


I wish you could hear a lot of the conversations that I have to listen to on our rides home with other hunters. If only I could speak the human language. The "big guy" talks about the tough shots he makes quite often. If he is such a good shot, how come he's always cussing after most shots? I've heard more lame excuses over the past two years for missing shots at chukars than most dogs hear in a life time. Yesterday, it was the wind. Sure, it was a little gusty, but most guys could shoot better in a hurricane. How many different tings can get into a guys eyes? I've heard them all, dirt grass, the sun and even tears, which is the one that I believe the most. He's probably crying because he thinks he's going to miss the shot. Thanks to a wide spread of shot the bird sometimes flies into his pattern.


Sometimes I wonder how much fun the "big guy" is really having. Last week he kept complaining about the fog and inversion. Inversion must be some kind of large device that keeps the fog from moving out because he was constantly speaking about the DAM fog. The fog doesn't bother me at all. I still find the birds. He just uses the fog as another excuse for missing. "I had to rush my shot", he'd say, or "they disappeared as I fired". 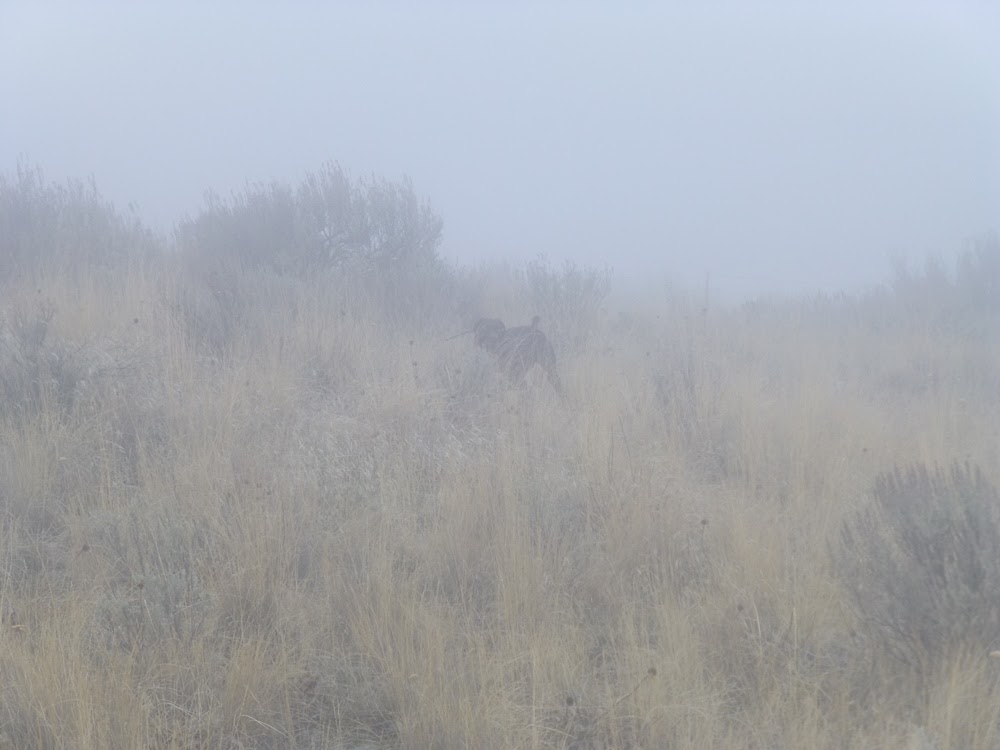 And then, there is the snow. Sometimes you'd think it was the kiss of death for the "big guy" the way he complains about going up a hill in it. As with any other type of weather, I don't have any problem getting to the birds and holding them but he seems to think it really hinders his movements and ability to shoot. He says he can't get his footing. I can almost believe that excuse, the way he is always stumbling around on the mountain. I remember this point. We both could see the bird hunkering down and he used the icy snow for an excuse for missing the bird. 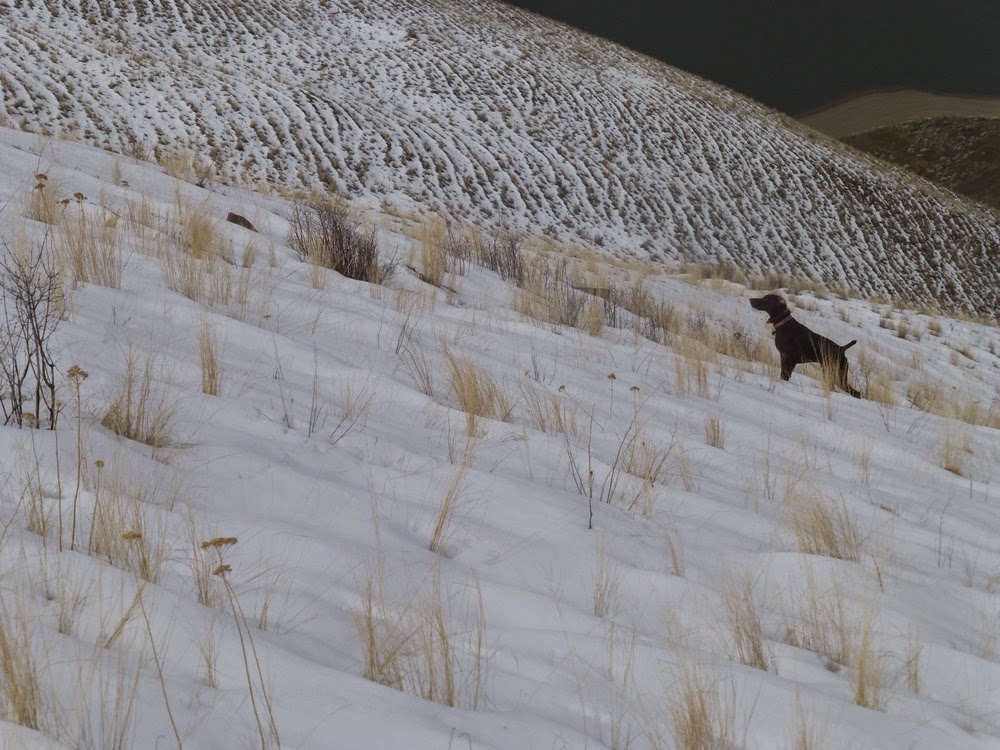 At least he didn't try shooting him on the snow and spared my ears. I do have to admit, it was quite comical, watching him sitting in the snow cussing his gun as if it had anything to do with it. The "big guy" did get a chukar on that crusty snow day. I remember it well. He whined like a baby when I dropped the bird at is feet and it slid down the hill about thirty yards before stopping. He wanted me to get it again. If they're alive and flopping down the hill, I'll get them again but when I drop them at his feet and he can't bend over enough to pick the bird up than it is his problem. He needs to work some of that belly off in order to bend better. 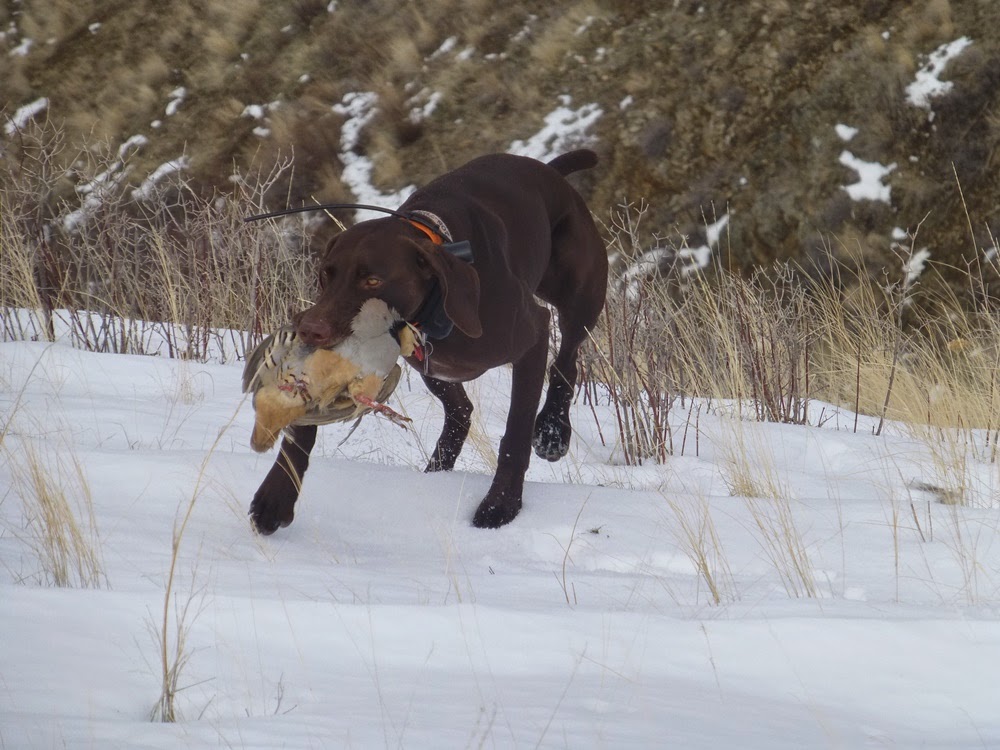 I think the mud was his biggest obstacle. I've never heard so many different adjectives for mud. Most of them I better not repeat. My pads get totally covered by what he calls slop but you don't find me complaining like he does when he slips and gets some on his gloves. If he goes far enough down to get some muck on his gun you'd think it was the end of the world. The echoes of his not to kind words echo off the canyon rims for miles.


I've heard a lot of his excuses for missing but you're not going to believe this one. "I pulled up and missed on purpose" he said at one shot. The birds were too close and he didn't want to hit more than one. Strange, how just one week earlier he dropped two with one shot and said he did it on purpose. Go figure that one out.

As I recall, it isn't just inclement weather that brings the worst out in the "big guy". He did a lot of whining during the fair weather also. I remember him falling on a flat trail and cussing his new knee for not bending enough. I think there was a line of ants crossing the trail that tripped him. How high do you have to lift your leg to clear an ant? Maybe I'm being a little hard on the guy. Maybe those with only two legs should stay on the flat ground. I really wish there was something I could do for him because with all of his short comings he does get me out a lot. That's the main reason I don't cover my eyes when I'm listening to his stories from the back seat of the truck as we return from hunting trips. Humans will believe anything.

I have to admit that I couldn't have asked for a better companion than the "big guy" because he takes so much time to get me out. But I sure wish he was a little younger. You should hear all of the complaining Barb and I have to listen to when we get home. This hurts and that hurts. Would you rub some heat ointment on my back. God bless Barb for getting him back on the mountain with me. You chukar hunting dogs out there, be prepared. The complaining gets worse with age. Oh, they're still having fun, they just have a hard time showing it. In fact I think complaining becomes more fun as they get older. At least he's getting better at it.

So in the future, when you see a picture like this, 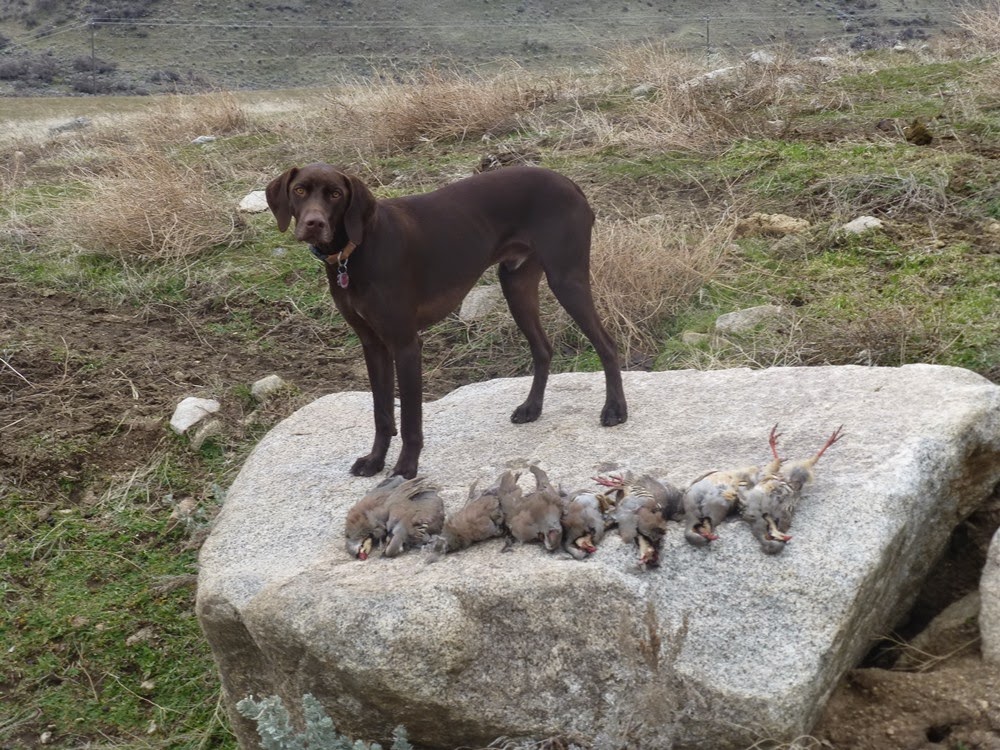 understand that there are just as many days like this picture that I took of the "big guy", with plenty of excuses for the poor showing. 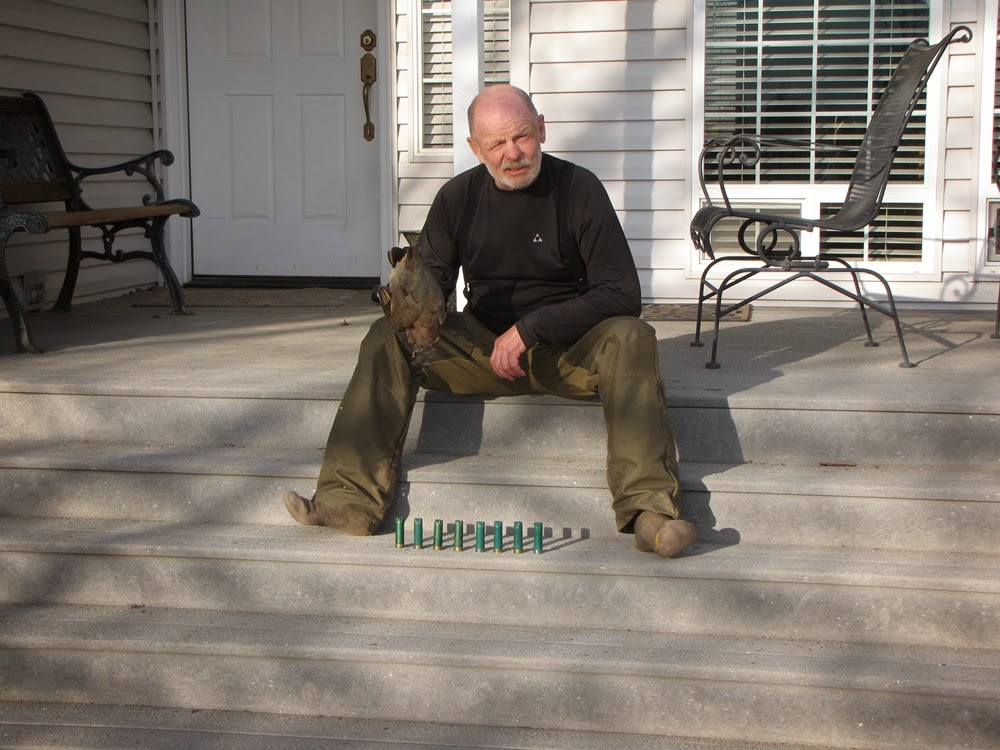 Notice the number of shells spent and the number of birds. I pointed a bird for each shell shot and also retrieved each of the birds he shot. Had we been riding with someone else that day, I  could imagine the story I'd have to listen to. It would go something like this. Didn't see many birds today and got the only one Jake pointed. As usual I would have just kept my eyes shut, pretending I was sleeping. That's just a part of being a good hunting partner.


So, whenever you see the pictures with all the birds that we got for that day, there is probably two days that would look like that last picture that are not mentioned. From a canines view, that's how it really is.

Posted by larry szurgot at 6:55 PM

Jake,
I can sure relate to your last post. My master(I use that term lightly) Has been taking me hunting lately, finally. He tells everyone that I needed time to heal after my surgery. Boy, thats a lot of bull. The truth is he was being lazy , no getting around that. He sat on the couch, eating a big cinnamon roll which he always has on Sunday. His one day off his diet. He watched football for two weekends while I was limited to a couple trips to the beach. We went ptarmigan hunting and only saw two birds which didn't hold and flew wild. My cousin,the Golden retriever actually flushed them .I was getting ready to point but then the big golden decided he knew how to hunt. What a jerk he is. Don't know why my master didn't shoot at the birds . Must have been defocused on something else. He does that a lot these days .Then, he falls through the snow and we all have to help him up. What a chore that is. In short, you don't have it so bad as you think. The worst part, is he doesn't share those cinnamon rolls. I have to keep my weight up. Take care Jake, we'll get them trained one of these days.
Mays

Mays,
Sit there staring at him and drool as he eats his cinnamon role. It works great for me.

Jake is a very good writer! He tells it the way it is, which is refreshing especially during these three months that I am down in Juneau for the legislative session.

It has been great fun following your adventures this season. I am glad to know that you do have days that are more like most of mine. I like the tailgate pics. Makes me drool like Jake does if I stare at them too long.

I hope for a great spring, strong legs and knees that can get us back down the hill.