We got our white Christmas this year and some darn cold weather to go with it. I've had several people ask me how the chukars are going to survive in these conditions? After a couple of days of sunny and cold weather I decided to go over and find out. My answer is "much better than me."

Even though the temperature never got above 14 degrees, Jake and I were happy to see some burnt off southern slopes. Up we went to the sounds of chukars taunting us. The chuk, chuk chuk, sound made it hard for Jake to stand still as I put the collar on him and before I started up the slope he was 200 yards above me. I was a little disappointed to see him flush the first covey but watched intensely where they flew to. 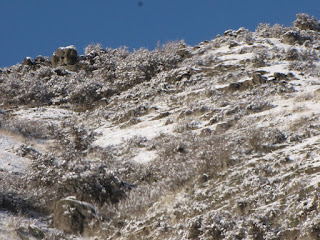 Although the temperatures were cool, it wasn't long before I was taking my heavier sweater off. I was amazed how soft the ground was under the snow. It didn't get a chance to freeze before the snow came and the snow served as an insulator to the ground. As I got to the elevation where the first covey had taken flight, there were bird tracks everywhere. It looked like a feed lot. Higher up the mountain my new Astro said Jake was on point. Up I went but by the time I got to where I could see him the birds must have taken flight because he was on the move again. Straight up the ridge from Jake was a line of chukars sprinting to the top of the hill where I was sure they would take flight. To be honest, I didn't even really care. It would take me forever to get to where they were headed. Jake hit the scent trail and soon followed. Shortly after he disappeared I watched a large covey of chukar fly around the top of the mountain. They flew in the same direction as the first covey of birds so I decided to side hill in that direction.

Jake had no problem covering the ground on the shaded slopes but I was wondering how long it was going to be before I slipped on the snow covered ground and broke something important. My head obviously wasn't holding anything of importance in it, so a fall there wouldn't harm me. 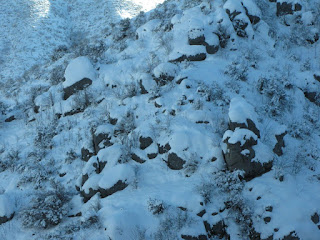 As I navigated across this miserable slope, Jake was on point on the other side of the ridge. I don't know how long it took for me to stumble over to him but by the time I got there all I found was chukar tracks everywhere with a dog pointing in the middle of them. I don't know if he ever saw the birds but there was so much scent he must have thought there were still some birds there. There wasn't. Up hill a sudden explosion of birds caught our attention and they flew over the ridge towards the next draw. 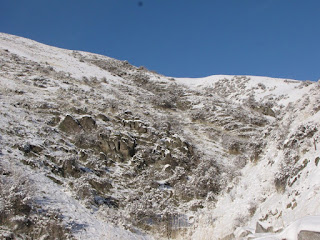 I followed Jake even higher on the burnt off slope in awe of all the chukar tracks and droppings. As far up as I could see were more chukars running and chuking before they took flight around the hill. It was too much for Jake to take. Around the hill he went to see where they were going. I gained a little more elevation before taking the direction of the birds. Once more I found the walking to my dislike. 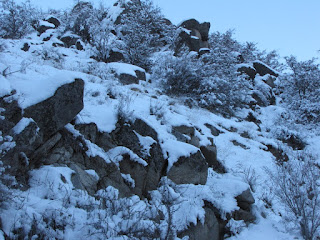 I struggled to get over to the next burnt off ridge, which held the same fate as the previous two. Jake once again led me on some false points and we watched birds running and taking flight higher on the mountain. They were at home surviving like there was no danger to them while I was walking along on the hill like a fish out of water.

Somehow my brain finally made some sense and told me it was futile for me to think I was ever going to get any of these birds today and head back down to the road. Jake wasn't real excited about it with all the birds. Hell, he didn't care whether we got any or not, it was still fun. So down the ridge we went. To my amazement, Jake got a couple of points on the way down. I was surprised to find birds where he pointed. 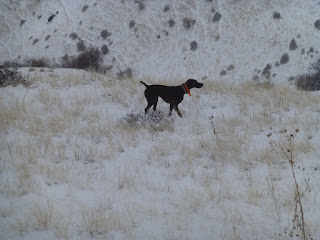 Why would birds hang out in this snow? I won't complain though. I think it's the first time this year I shot 100%. The loner was ours. 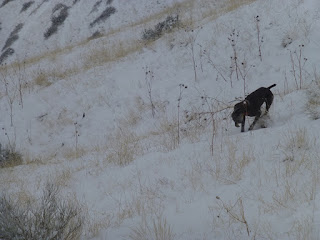 In a little over two hours, I covered two miles and 1220 feet of elevation. I saw around 100 chukars and figured out that these conditions favor the birds. In just a matter of seconds they can be on the next burnt off slope where they can find all the food they need. The higher up and steeper the mountain, the more bare ground on the southern slopes. Chukar don't need to come down to the valley. Even in sub freezing temperatures. Mammals, like humans and coyotes are of no danger to them. Predators from the air may get a few of them but all in all, the chukars hold the trump card in these kind of conditions. As long as the sun shines, there will be bare slopes up high.

Now, if I can only find that internet page that shows the mountains of eastern Oregon and western Idaho. My gas card is running low and I'm getting tired of driving over there to find out there is still too much snow covered ground for me. Here in Horseshoe Bend, the skies are overcast like an inversion and there will be little burn off today but it's hard to say what it is like 40 miles away as the crow flies.

So far this winter is turning out good for the birds. We still have another month to try and get even.
Posted by larry szurgot at 9:26 AM

Not sure what website you're talking about, but here's one I found with a list of webcams in the northwest
http://www.northwestwebcams.com/idaho-web-cams.shtm

511 oregon, or idaho will give you the view from road cameras. Eastern oregon is still pretty covered as I live close to the border. I drove from pendelton to ontario a few days ago and hills were still coated, even south slopes. Today didnt melt much. Looked like 2-6" of snow on the hills.

Thanks guys. With the sun shining today maybe we'll have a few more open slopes soon. Side hilling the snowy frozen slopes takes it out of me.

Drove to juntura and down to warm lake south west of juntura today. 2-6" of snow on chukar slopes, even south rocky faces. No go on chukars there. To much snow in most areas. Also, friends from washington are trying to hunt oregon side of brownlee. They are struggling to find anywhere to run their dogs and walk safely. Too much snow. Son lives in baker city, and he says "no" to hiking hills towards richland. Few days of good sun may open a few slopes, but it could be a while in this weather.

Wow! Alaska weather in Idaho. High winds and rain here. Over 40 degrees here. I'm taking the dogs out New Years day to try and find a stray ptarmigan. Haven't been able to get up the roads due to ice. Hopefully the roads have thawed a bit. At least Jake is having a good time on the hills . Sounds like risky footing where you hunted.
Say hello to Jake.
Alan and Mays and the setter.