Still miserable out there.

I should have paid more attention to Mark's comment last night about the lack of snow covered slopes. Mark, keep me posted. I had a hard time rolling out of my truck a half hour ago. My back has never been this sore after a days hunt. The twisting and turning was too much for this old body to take. Side hilling has never been quite that tough.

That old saying "the grass is always greener on the other side of the fence" also applies to chukar hunting. A few days ago I was on the Idaho side of Brownlee and the Oregon side seemed to have more burnt off slopes. Today I was on the Oregon side and it looked like Idaho had more bare ground. After today's hunt I decided those bare area's are much smaller than I thought and a lot higher on the mountain. Going up the hill isn't really that bad. The snow is still powdery and makes for fairly good footing. In fact it's still so powdery, the first bird we shot today was lost in the wide open for about fifteen minutes before Jake finally locked on point in an area we had been covering looking for the bird. It had simply fallen into the powder snow and we lost it for a while, even though it was stone dead. 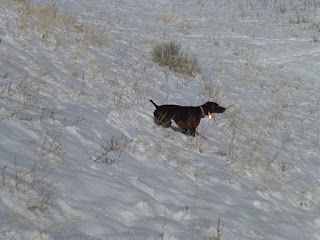 Side hilling was almost impossible at times and it took forever to get to points, if the birds would hold long enough. Down hill was even more treacherous. I fell several times and the birds seemed to be more flight coming down on them. Jake and I had far better luck on birds pointed above me. I should say Jake had better luck, I had a tough time squaring up for any kind of reasonable shot on the slick turf.

Anyhow, that's what the hunting is like for me. Hopefully some of you may have some hot spots where the sun has been radiating heat. I wonder how Greg Munther is doing down in Arizona. Sure sounds nice. Topping the day off, Jake disappeared as I was starting the fire. I found him sitting on the bed in the front bedroom and looking out the window. 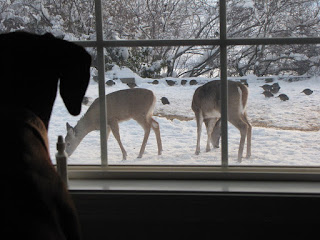 Why can't it be like this on the chukar hill?
Posted by larry szurgot at 3:40 PM

After reading your last two posts Larry, you have me convinced; I am dumb and foolish since I am still headed west to chukar country Friday.
I have hunted those nasty, side hills and vowed to not do it again. But, the season is closing quickly and my dogs are not getting any younger.
Thanks for the reports. I am packing two shotguns, just in case I need to use one to stop my slide.....

Good for you. Another true chukar hunter. Strong legs, good dogs, and no brains. Maybe we'll cross paths. I have a 2016 hunting license that hasn't been used yet.