We made it through the cold inversion weather and so did the birds. 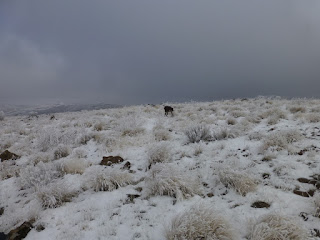 I spent a couple of days with the family getting some pre Christmas stuff done and they ended up being the two nicest weather days of the week to be up on the mountain.

The next time out, Jake and I made it up the hill early and then a slight mist began to fall. It only fell for a half hour or so but with the temperature being somewhere around 25 degrees everything turned to ice. Jake didn't seem to be effected by the frozen rocks and ground and found plenty of birds. 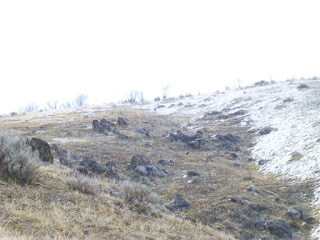 Although it didn't look that bad, evidently I got an accidental picture of my fall 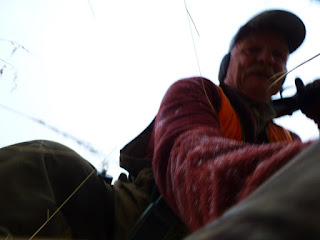 between Jake's point and retrieve. 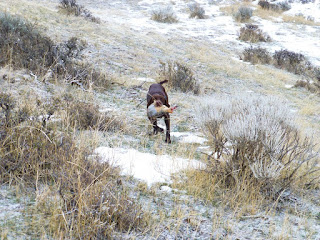 I can't even guess how many times I slipped and fell that day. But it was worth it getting to Jake doing his thing. 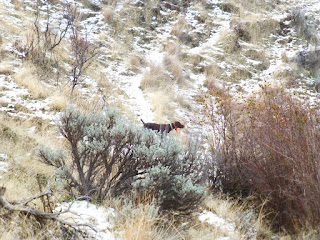 My next time out was in a slight rain. It rained hard the day before and Jake and I were excited to get back on the mountain even if we got a little wet. 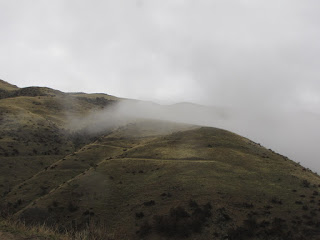 We put in a lot of miles and Jake was proud of his days take before we headed down to the truck. 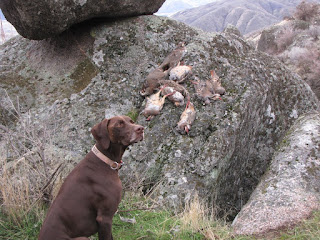 It was so much fun we thought we'd head out to another place today even though it was raining slightly. 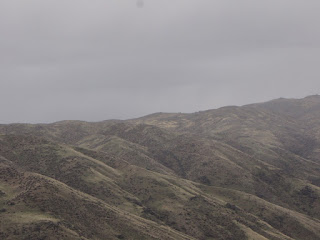 The day ended up much like yesterday with a lot of great action the higher we got on the mountain. 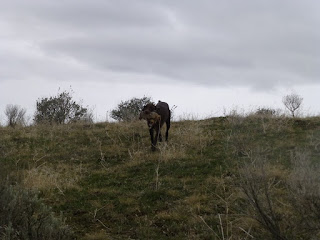 The rain picked up a little more as we got further into the day and further away from the truck. It didn't seem to faze Jake for a while because he kept coming up with these long distance points. You can see him down below on the lower right of this picture. 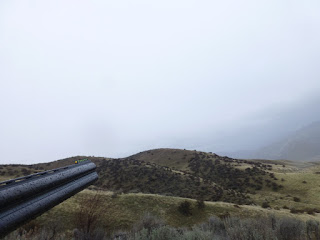 He held the point until I got in position 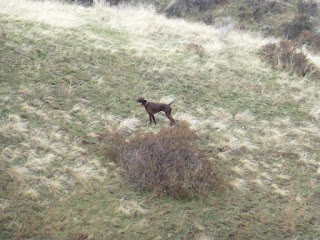 and for a change I did my part. 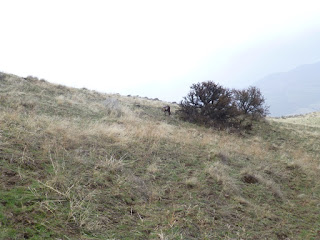 The day continued like this and we ended up having a pretty good day. The last hour we headed straight back to the truck because the weather really set in. Jake and I were both soaked. We even busted a couple of chukars as we headed down the hill but like Jake, I was just interested in getting off the mountain. You can see how cold Jake is by the way his tail is tucked and the hair is standing up on his back. 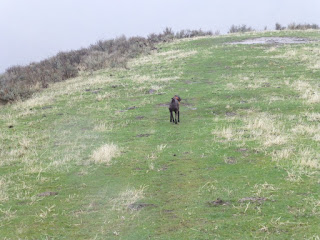 I'm sorry about so many pictures, but I'm pretty proud of Jake for doing so well in the rain. I usually try to avoid hunting on these days but obviously I should change my thought process. There are only so many days in the hunting season and by staying at home waiting for that bluebird day the season could be gone in no time at all.

A post script to this post. It's amazing how hard it is to find the flushing birds on these dark overcast days. Usually by the time I would finally get on a bird they were at the far end of my shooting range. Especially when dark brush was involved.

Posted by larry szurgot at 5:04 PM

Love the pictures! Thanks Larry!

Excellent day in poor conditions. BTW, I am Bee from the old Upland Idaho pages...

Good to hear from you Bee. I sure miss Upland Idaho. Lot's of good people there.