Like most of you, I am getting cabin fever already. What's worse is my dog is too. Not only can we not hunt, the hiking is terrible and we can't get out and cover the country like we would like. So, I decided to fib once again and come back to posting.

Jake and I have taken a lot of rides over towards the reservoir but most of the time have been turned back due to freeways being closed or roads we couldn't get in on. 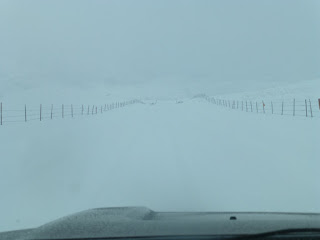 Yes, I finally got sucked into a snow drift and spent two hours digging out and getting turned. Shortly after I got turned around I met a cougar hunter heading into where I tried to get. The big difference was that he had a snow mobile on the back of his truck and I had already provided him a good parking spot. Yesterday, this is what the same road looked like. 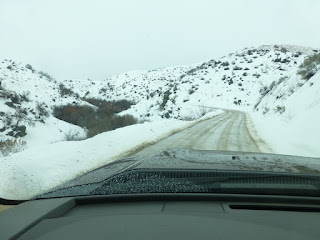 As we got closer to the summit the hill looked like it hadn't gotten out of that 0 degree pattern yet. 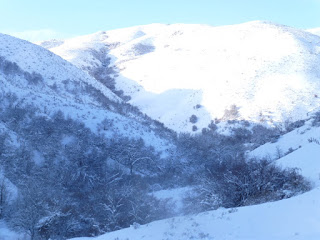 We didn't take a shotgun because we knew getting up the mountain would be close to impossible for Jake and impossible for me. We just had a camera and what we figured we needed to get around. Anyhow, that's what we thought until we ran into a coyote hunter stuck in a snow drift. When I got into my tool box to get my pulling strap and chain to help the hunter they were gone. I racked my brain to figure out where I might have left them and tore the shop apart when I got home but have come up with only one answer. I always leave my tool box unlocked when in the hills. I figure if someone comes along in an emergency and I'm not there, they might find what they need in the tool box. I guess they did but didn't want to leave a note as to how I could get the strap and chain returned. They didn't take any tools that I can see but they're so rusted I hope I don't have to use them. I'm a little disappointed but I'll get over it.

Good news is that there were birds everywhere. 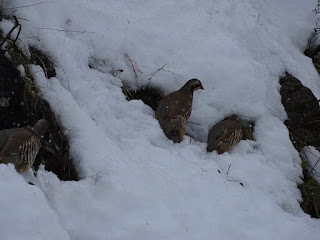 I mean all kinds of birds. 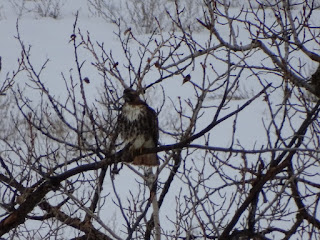 Once in a while we found some big game, but not as much as I expected. 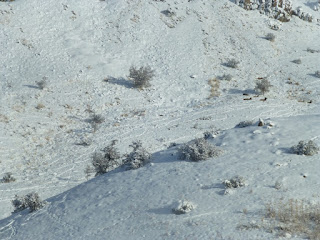 But the chukar looked very healthy and were scattered out quite a bit. 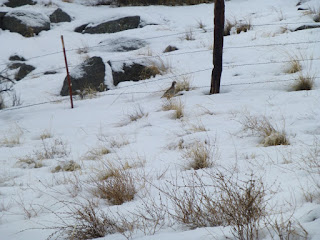 I never saw any large covey's and I'm thinking maybe it was because of all the predators flying around. 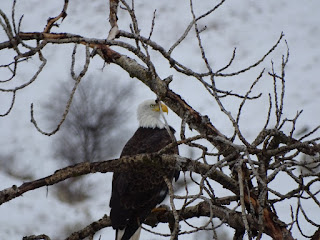 One of stranger sightings was a rock chuck. I wasn't quick enough with the camera but I came around the corner and he was hunkered on the snow out side of this hole 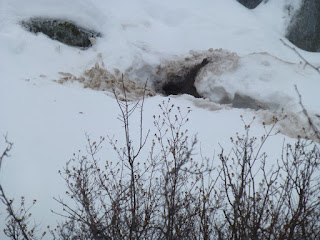 It isn't Feb. 2 yet but maybe he figured it a good time to be out with all the hawks concentrating on the chukar population. 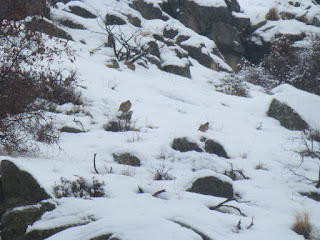 Just one more picture of a hawk 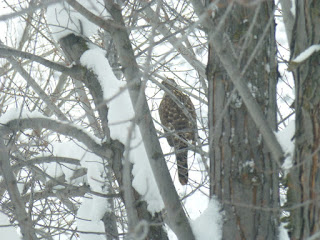 that might be interested in these early morning road side chukars before I get into the really good news. 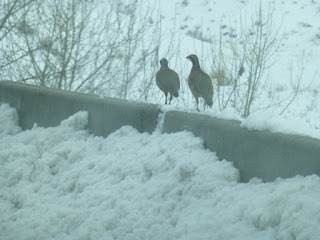 With this weather being so bad and one of the worst storms I've seen sense the 70's I decided to reread a lot of articles pertaining to the chukar and it's survival. My findings mimic what several other guys have posted. None of the studies were from Idaho or Oregon but Nevada, Utah, and one from Colorado. I averaged them together and came up with these stats. 83% of all chukar that go into the fall season will be dead by the following spring nesting season. 39% of the mortality rate is from avian predation (after this last week of being over at the reservoir and observing, I have to believe it's true), 17% mortality is from mammal predation, hunter harvest is 8%, and the other 36 % unknown because the collars or whatever were not recovered.

Every reading stresses the importance of the early spring and early summer conditions so that the hen comes into the breeding season healthy and the chicks have lot's of protein via insects once they are hatched. The worst conditions for nesting and survival of chicks are hot weather and droughts.

So, my answer to the question of whether to hunt these late season birds or not is, "do what you feel is the right thing to do and don't chastise those who decide to do the opposite. You both have your merits. There is a chance that you might be shooting one of the 17% that survive to spring but you also take that chance earlier in the year. The bird's I'm seeing look to be in good shape although I hear from others that they are looking poorly. I question whether those birds that are stressed would survive anyhow but it would just be a guess. Remember that survival of the fittest theory and passing on those good genes. I'll be better qualified to survey their condition when I finally get a chance to shoot a bird again.

I hope that chance comes soon. If the hills burn off enough that Jake can spread his wings and cover some ground I'll be there trying to keep up with him. That is my preferred way to hunt. Covering a lot of ground and watching my dog do what he loves to do. I have gone west 8 of the last 11 days and most of the time never reached my destination because of the weather. When I have reached my destination, Jake was up to his belly just getting out of the truck to relieve himself. Oh, he got excited seeing chukars run up the hill when we got close enough, but I'm hoping that excitement is burning in him like it is me. I'm sure it's going to be a few more days before we even think of packing a gun but if the sun peeks out enough some slopes may burn off enough to provide some thrills as long as I can bust through the snow on our way to them.

Either way, hunt or not the rest of this year, I'm going to think positive and believe that all this snow is going to make for good spring and nesting conditions that provide the best season (2017-18)that we've seen in a quarter of a century.

Posted by larry szurgot at 9:34 PM

Thanks for this post, Larry. It gives me hope. I'm glad you saw lots of birds, and that they looked okay. Thanks also for the report on mortality rates, etc. I've got some bookmarked things to read, too, and look forward to having the time to do that. Good luck, and be safe out there.

Larry, thank you for your pictures and comments.ihave enjoyed them for several years.for me it's a vicarious adventure. Many chukar hunters are very concerned over the weather conditions and its affect on the future chukar population. I believe we all have the right motive to express our opinions. So here is mine: 1) I have hunted the same coveys in Idaho for the last 30 years and they are still In the same places. Most of that time I hunted with a Navy Seal, who recently retired as commander of Seal Team Six. He often commended as the covey left untouched, they're survivors from the toughest places on the planet. If he couldn't impact the chukar population, I am possitive no one else can ( he can shoot). 2) I have a Wildlife Biology BS degree from Virginia Tech and am recognized as an Associate Wildlife Biologist by The Wildlife Society. The folks at the Idaho Fish and Game are top notch professionals who are responsible for providing protection of the wildlife resources and opportunity for us as hunters. I believe in them. They set the seasons knowing that weather conditions can sometime turn treachous. 3) check the webcast put out by the North Dakota Game and Fish department. They have an excellent video disscussing this very topic.

I know this is a hot button issue. I just returned from a week of duck hunting on the Snake River in Eastern Idaho and have concerns for the future. Good spring conditions will set things right. I will be chukar hunting next year, God willing. Many thanks, Ron

Ron, thank you very much for your input. I love hearing stories about other chukar hunters and would love to hear more about your Navy Seal friend. Hard hunting and dogs is the thrill for me. I, too believe in the Idaho Fish and Game and I also believe in most hunters doing the right thing when it comes to making the right decisions in respect to all game animals.

I'm trying to find the video you discussed but am having a hard time. If you have more info on how to find it, I would appreciate it. Once again thanks and good luck in the future.

Go to gf.nd.gov then the webcast titled "winter wildlife". The focus is winter mortality on deer and pheasant. There is a lot of info in this short video. My hunting partner lives in Idaho and has real good dogs. Some get to sleep inside.

I know you have this figured out. Hunting on hills in deep snow falls in the category of self limiting activities. No regulatory action needed.
We had regulations prohibiting quail hunting in Virginia a couple decades ago and the Fish and Game removed it. Fish and Game also had ample data regarding the effect of hunting in the snow on total mortality, which they concluded was not additive (it stayed the same).
Ron

I left out : regulations prohibiting quail hunting "in the snow" in Virginia. Sorry

Thanks for the information, Ron. The key words are "self limiting" which is how the bird biologist from the Idaho Fish and Game has described chukar hunting to me several times. Even on the mild winters when the bird numbers are down, most bird hunters stay home while some of us foolish dog lovers keep chasing our dogs up the hill.