Another one bites the dust. Conner wanted to introduce his friend, Carson to chukar hunting and I volunteered to bring Jake along to help find some birds. Being that this was Carter's first year to hunt I decided to leave my shotgun in the truck for safety purposes. I packed my camera instead. 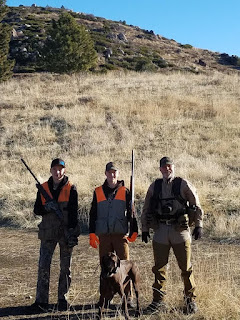 Barb was kind enough to drop us off high on the mountain and agreed to pick us up at the given location 5 1/2 hours later. It turned out to be a good move because we didn't find a bird for the first hour and I got to watch how Conner, Carson and Jake worked together and that safety was observed. It was enjoyable to watch them walk the hills and respect the directions of the guns. I got close to 100 pictures in our 8 mile hike but won't bore you with most of them, just a dozen or so. Here goes. Conner and Carson moving in on one of Jake's first points. 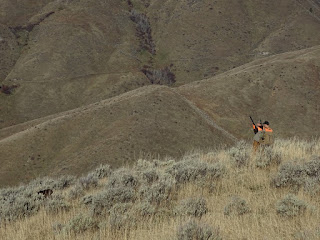 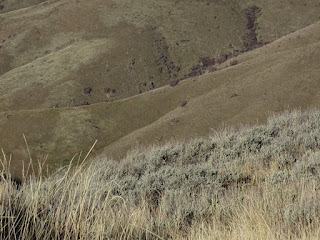 The result after Conner's shot. 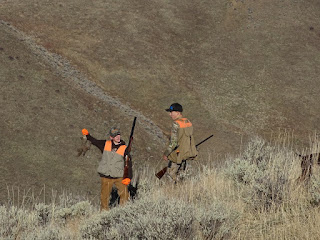 When I asked Carson why he didn't shoot, he remarked that the birds were too far by the time he got his gun to the shooting position. We discussed how to properly approach the point with a ready gun, not shouldered, and try to be square to where you think the birds might flush, shoot ahead of the bird and keep swinging the gun after the shot. It's that simple, right?

Before going any further I must admit to how Carson picked the shotgun he was using. Here was his choices. My Browning 12 gauge over and under, which I love shooting, a Remington auto in 12 gauge, a Benelli pump 12 gauge or a 20 gauge Remington 870. My main concern was which safety feels most comfortable for safety reasons. He chose the 870 because he had shot a gun with a similar safety. Now, I'm going to be hung out to dry on this one but when it comes to chukar hunting, I don't think the fit is as being comfortable with the gun. 50% of the time, when you are shooting at a chukar, you're not in position to properly mount the gun. One foot is higher than the other, the birds aren't where you thought, you're standing on slippery snow, or another thousand excuses as to why you can't properly mount the gun. In most other hunts, the gun fit is very important because you know where the shot is coming from, you're on level ground and have time to properly bring your gun to the shoulder. Anyhow, that was my opinion to Carson. Comfort.

On to the hunt. Conner didn't mind at all waving Carson in to where he figured the best shot would come from. 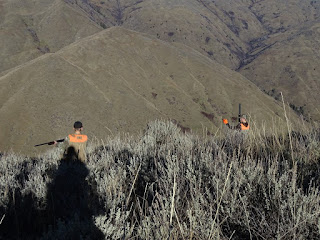 Carson got his first shot but forgot to swing the barrel with the flight of the bird. 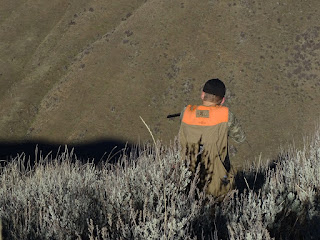 We talked a little more about the swing through and were off to the next point. Carson followed through a lot better but still missed while Conner showed off the hun he shot off that flush. 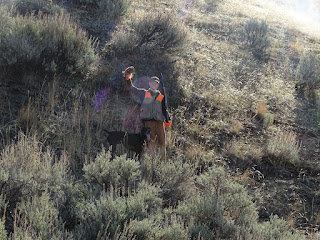 The nice thing about being the guy taking the pictures is that I don't always walk all the way but just sit back and take pictures from a distance as they approach Jake's points. 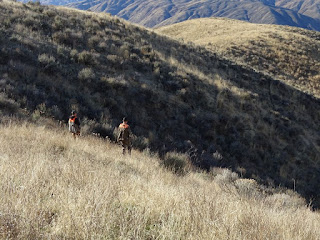 And then it happened. Carson moved in on the birds and snapped a shot. 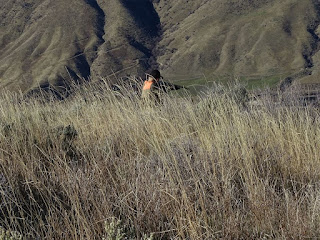 Jake brought the chukar back to Carson as if he knew who had shot the bird and there were three excited people and one dog on the hill. 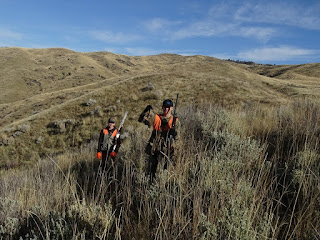 The day just kept on going like this and we had plenty of covey points and shots fired and for a couple of young punks they made the day very exciting to be a part of. Jake even started understand that I had nothing to do with this hunt and didn't bring any more of the birds to me which I appreciated. An empty bag with no shells and just water felt real comfortable, especially with no gun in hand. 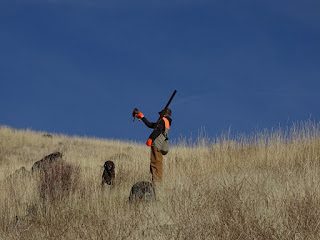 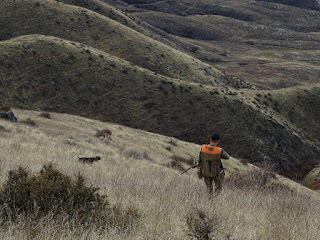 and then I would take a series of pictures of the boys as they moved to the front for a shot. 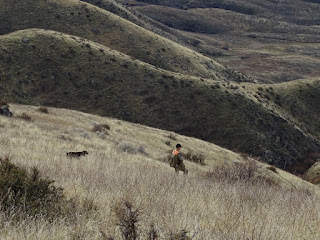 I was a little quick on this shot but Carson dropped a bird here. 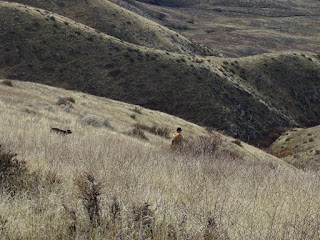 When we reached the pick up spot the boys hunter a short draw for some quail and had some fun shooting while Jake and I sat back at the trail. Jake didn't like hearing all the shooting while we hung back but we don't hunt quail and I figured the guys would be better off without us.

I think Conner and I have created another upland hunter. Even though they had a pretty good shoot 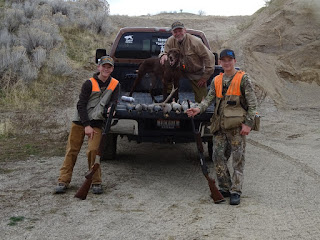 we'll have to wait and see if Carson comes on our next invite. It was a tough hunt on the body.

I have to admit to maybe being selfish. I always read about people that take a young man out and get more satisfaction watching the young man have a good time than if they were hunting themselves. I really do enjoy watching others doing what I love and have taken many young men on trips for there first deer, in fact I've taken 16 teenagers out on successful first deer hunts and never even thought ". But chukar hunting does something else to me. I get the shakes whenever my dog is on point. Watching someone else take a bird is really thrilling, especially off my dog, but I'd be a liar to say I didn't wish it was me doing the shooting. I don't think I'll ever be that man that can just enjoy the scenery.
Posted by larry szurgot at 8:10 PM

Hats off to you Larry! We always say that young hunters are the lifeblood and the future of all hunting. Great to hear and see that you took the time and the interest in these young men. Conner already knew the thrill and excitement of a covey rise. Now it looks like Carson could be a “lifer” too after that nice hunt. Lest we forget our canine buddy that makes it all happen...atta baby Jake!!! Well done my friends 😉

Great pictures as usual . great that you took the boys out. also I know that camera didn't weigh as much as a gun.I do that too when I take family out.Gives me a chance to focus on the dog. the wife and I Bought a car so we have two vehicles.Can't wait to get in our home.My oldest daughter Heather is coming down to hunt Dec 11th so I'm excited about that. keep having fun with those boys.So happy you are building memories that last forever.Look forward to meeting you soon over coffee or something.I've been busy with the move and have got out as much as my feet allow me. I will see a doctor at the end of Jan after hunting season. the vet gave me some info on places to hunt so thanks to both of you.
Alan,Mays,and the Setter

Great pics and story!! Nothing like success to encourage a new hunter. Another forever memory I am sure.

Good on you for taking Carson out....he and Conner will have a lot to laugh about....they may be lifer hunting buddies.

You know they had a good time when they keep telling me over and over how it happened. They forget I was right there with them.

always good to get the youngsters a bird or two or more on their first hunt. Nicely done Larry ...Tennessee