Finishing touch on the 2018 season.

Tomorrow I'm going in to get some hernia's fixed up. Nothing serious but they kept getting bigger through the hunting season and it's time to get fixed up so me and the dog's can enjoy our spring hikes and photographing.

Since I'm not feeling much like sleeping tonight I thought I'd show off my last hunt of the season which was today. The pictures of the dogs is pretty much a mirror of what I've been able to see all season.
Jake was the same stud he has been for six years now and Grady performed far better than I could have expected. He'll turn 1 in 16 days and has already had over 300 points to his credit. Some turned out great and some more like a first year puppy. But, by allowing him to be a puppy he has gained a huge drive to find birds. 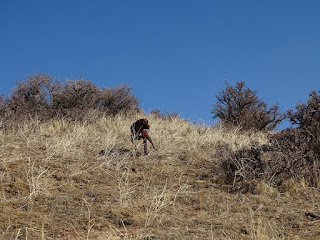 He bumped a lot of birds this year, mainly because he outran his nose. He runs faster than any dog I have ever had and by the end of the season he was covering the country beautifully instead of making just long runs. He doesn't check in as often as I would like but I think it may be because he sees Jake and that's as good as seeing me. 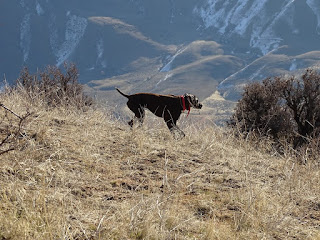 Jake on the other hand checks in regularly and watches for any change in direction. Although he gets out there a ways still, usually he is the closer of the two dog's. Jake has no problem finding birds and waiting for my approach. 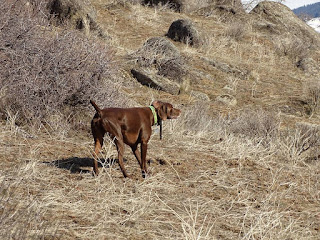 One of the things that amazes me the most is that even though the dogs run in their own directions and are hunting for themselves, they quite often find each other on points. Both honor each other although it took a little longer for Jake to finally except Grady's points. The only problem we are now having is when I walk out front of their points and I get about 30 yards ahead of them, one or the other will get a little nervous and before long they are racing to help me flush. It's a easy habit to break this spring when I don't have a gun in my hand. 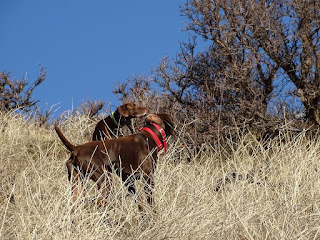 I've always had very good luck with retrieving. Maybe not to hand, but getting my boys to find down birds and get them back to me. Usually retrieving chukars is so steep that I feel grateful when my dog runs all the way down the slope to get the bird and back up the slope with it in his mouth. I know he wants to get it out of his mouth as soon as possible and I allow it. For some reason, not of my doing, Grady likes me to take the bird from his mouth which has been a real thrill for me. 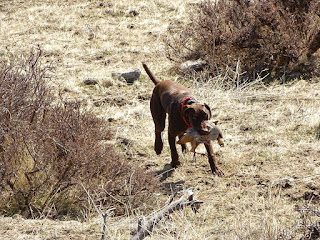 There is usually a race for a downed bird but once one of the dog's have the bird the other lets him have it. At first Grady tried to take the bird but soon figured he wasn't going to get it and would let Jake finish the retrieve. Jake quite often lets me take the bird from his mouth now because he doesn't want to put it down and have Grady claim it. 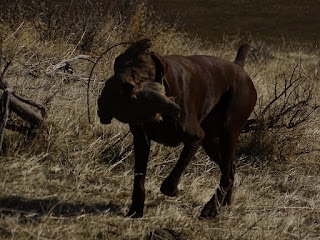 Although I've had some real trying days with the two of them, they have become quite a team and I'm getting to trust Grady more and more each trip. I'm having fewer times when I wonder why Grady seems to be busting the birds, and also Jake, and realize that the conditions can't always be right for a point. As I watch them work I realize that more often than not the boys will find the birds and hold them. Sometimes excitement takes over and I don't want to take that away from them just so I can always be successful. They are usually working as a team member and that's all I can ask.
As far as the hunter goes. I also had some up and down days. I didn't keep track of my shooting this year but I guess my percentage went down some. A couple of trips I really let it get to my head and would have had better luck throwing my shotgun at the birds. Yesterday I got five birds with 17 shots and most of them were pretty easy shots.
That was going to be my last day out this year and I was pretty disappointed in myself for ending it this poorly. Then a chukar hunting friend from Washington called me to talk dogs and just by talking with him I got excited to hit it one more day. Dave Schuler informed me he was looking for another pup since his current shorthair was nine years old and showing some wear. Now that doesn't seem odd until I mention the fact that he is 77 years old and had to miss 2 and 1/2 months due to a torn achilles tendon. 77 and ready to start  another chukar dog. What a stud. I figured I could muster one last hunt and try and make a better ending hunt for the season. Today my percentage improved to eighty percent. 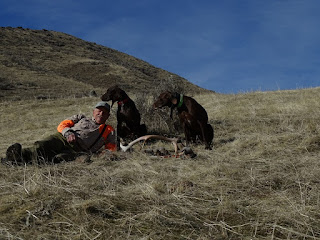 Jake and Grady were even excited for me and now we are all ready to take a few weeks to appreciate what God has given us. 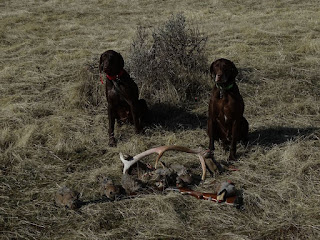 69 chukar trips this year. One more than last year. Thank you to my wonderful wife, Barbara for giving me the freedom to live life to it's fullest.
Posted by Tuckers Chukars at 8:51 PM

Congrats on a great season for the dogs.....they should be grateful to have a "Dad" who takes them out so much.

Thanks Greg. We had a wonderful year and partly because we got to hunt with you and your girls this year.

Now that the season is over and I'm getting reorganized one of the next projects is studying and commenting on this: https://idfg.idaho.gov/form/draft-upland-game-plan-2019?fbclid=IwAR3P76-1BFg1u39KBLIJvEIKHuHdVPTbf_X_0wd5orwOzfOkXI2Z-qTOEZc If that link doesn't work just search for Idaho Draft Upland Game Management Plan. It's the first one since 1990!

Thanks Burk.
I've already made my comments and I hope others will do the same, good or bad. I don't hunt the other upland birds much so I don't have a lot of say on them but I spend a lot of time on chukars, even in the off season, so I was particularly concerned about them. In my opinion most of the material on chukars is spot on and the main thing they can do to keep chukar hunting great is make sure we don't lose chukar ground. Luckily there isn't a lot of use for most chukar country and people aren't so interested in it yet.

I did a little test on a 1300 acre private property up here for the last five years and will be posting some interesting observations in a future blog.

That being said, everyone definitely take a look at the management plans and put your input in. Especially you guys from out of state. I know Jeff Knetter wants all the input he can get.