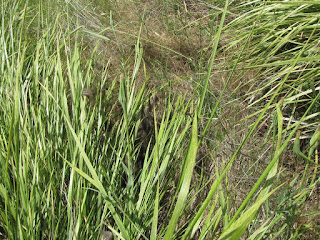 Posted by larry szurgot at 7:46 PM

Some folks will say it is just part of nature, but it is still difficult to swallow. Ranchers around here like to say that antelope need to have twins; one for the coyotes and one to survive. Some have seen coyotes intercept the fawn right during birth. That is something I would rather not think about.

Promise that your next post will include a photo of 18 chukar chicks!

Jay, I'm going to do my best. This morning Jake and I took a hike and got some pictures of two baby foxes and a huge rattler. There's no way I could do in the foxes but the rattler's tail is now in my treasure box.

As a bird and big game hunter I have a hard time justifying killing critters that are eating non-native chukars to survive just to increase my chances of having a successful hunt. I'm not saying predator control is unjustified at all times, there are pretty clear cases in "predator pit" situations with big game that predator control seems appropriate. But I feel like people harm habitat enough through development etc without going in to specifically alter the predator situation. I figure if the predators can find a way to survive we should honor that and let them get their slice too. I offer that as a fan of this blog.