As promised, with the rain falling again this morning, Jake and I stayed home in hopes of regaining some confidence in my shooting. The first thing I did this morning was watch the movie "Hoosiers" and the last thing I watched last night was the movie "Rudy". I've been thinking maybe I need some motivation. "Hoosiers" got me thinking of the basics of shooting but at my age, if I don't have the basics by now I'll never get them. "Rudy" was all about working hard to obtain your goal. Trust me, I usually hunt hard until the tank is empty. So, I've decided just to laugh at myself and hope that maybe someone out there might give me a clue. I know Jake would appreciate it also.

The day started out promising. Greg and I departed from his truck and headed up the mountain. I love hunting with Greg. I know he'll be covering the top of the hills so I just as well hunt lower. Who knows, maybe he'll push some birds down to me? The cover was sparse but I had found birds here in the past and was ready to give my Astro a try. With new batteries I was pleased when it showed Jake on point 175 yards away. 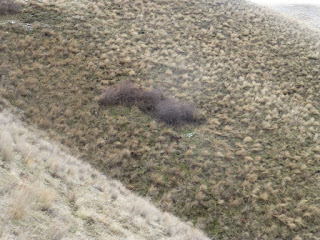 I moved down the hill and came up in front of Jake. With the birds in between us and above me, they didn't have a chance. As the 15 or so birds busted, I picked one that was almost stalled in flight. I hit it but it kept flying straight up. They call it a head or heart shot. You've probably seen it before. The bird just flaps straight up in the air. I decided to shoot at it a second time to make sure of the kill. Still looking like a stalled bird, I missed the second shot completely. The bird finally stalled out flew down hill a hundred yards or so and then tumbled to the earth. Luckily for me, the bird's flapping wings made enough noise to keep Jake's attention on it and he made one of those long retrieve's.

Wow! That was like shooting at patterning paper. Couldn't have been any easier. I felt my shell pocket and made sure I had plenty of shells. The next point had my full concentration on shooting. 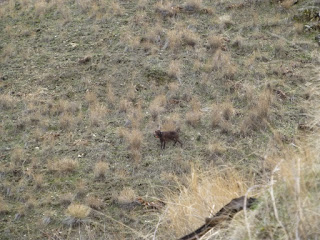 I moved to the front of Jake and a single flushed. With a leg hanging he flew from my right to left and neither one of my shots even drew a feather. A twenty yard shot on a crippled bird and I missed twice. Did I not follow through? Did I lead him too much? I was kicking myself in the butt and Jake went on hunting. He was glad I had the camera to prove he was doing his job.

The hunt continued with lot's of points and even more poor shooting. It didn't matter where the birds got up I was destined to miss. After somewhere around ten misses in a row I decided to concentrate on making just one shot. It worked. On Jake's next covey point, I dropped a chukar stone dead. 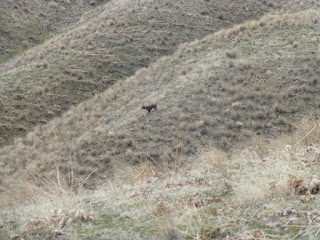 It was even a shot that I usually miss. Going straight away and down the hill. Okay, I'm back. I thought. Several points and shot's later I decided to go back to shooting both barrels since I obviously wasn't putting enough lead in the air. Not only were the birds not dropping, they showed no sign of being hit. The chukars even started holding tighter, having no fear of me and my shotgun. They started holding even when there was no cover. I became tempted to resort to ground shooting but refrained. 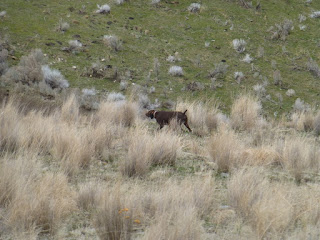 I finally dropped another bird and Jake was happy to put something in his mouth again, 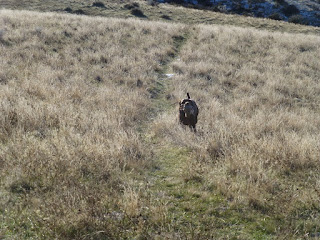 With a lot of birds down below me I headed down towards the reservoir in hopes of maybe shooting better as I headed back to the truck. Jake did his job but my confidence was gone and my shooting didn't improve much. 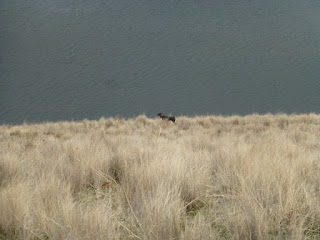 I finally shot one more bird before I hit the road and decided to walk the mile back to the truck on the road. If I went back up the hill I'd probably just miss so I'll end it with a positive note. 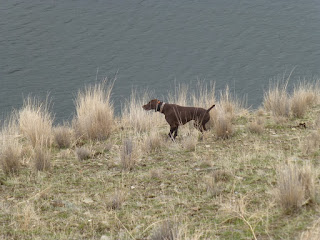 I took the collar off Jake and turned the remote off and headed down the road. Shortly before I got to the truck I realized I was missing Jake, I walked over to the edge of the road to see Jake on point between the road and the reservoir. There was very little cover between all the litter scattered on the shore  and I was sure he was not pointing birds. With my shotgun empty and broke over my shoulder I yelled for Jake and was even further discouraged when a large covey of huns busted in between us. They were in such a tight group I could have probably flock shot and got two or three. RIGHT!!!!

About ten minutes after I reached the truck Greg and his girls, Katie and Trudy, came off the hill. I was sure his vest would be full and he'd have some good advice for me on our two hour ride back to town. 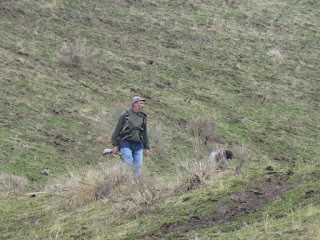 Maybe Jake and I will watch "Rocky" or the "Gladiator" tonight before our hunt tomorrow. I'm searching for something.
Posted by larry szurgot at 9:36 AM

I'm no expert, but what has helped me, when I have gone through a similar shooting slump, have been two things:
The first is to make sure I make a very good "mount", with the gun.
I practice the mount at night, making sure everything is correct in alignment.
The second thing is to avoid shooting too fast.
This relates to #1.
It's easy for the mind to scream: "it's getting away", during the flush.
Taking an extra second, for the mind to make that final mental correction,
has helped me more than anything else.

Thanks Nick. I forgot the old practicing your gun mount in a room and swinging down the ceiling and wall line. I'm gonna try that some tonight and go to the field with a better frame of mind tomorrow.

How is it that you get so many pictures in the field, and also get a lot of shooting in? Great job

Sorry I didn't get back to you sooner but Jake and I have been out chasing for the last few days. I found that taking pictures slows me down at the right time. A lot of times by me taking the time to snap shots not only does Jake calm down it seems like it gives the birds time to settle in also. I use to charge in like a rut crazy bull when my dog's were on point causing all kind of chaos. The more excited I acted, the more everything around me sensed the anxiety and I got more wild flushes or a dog that was ready to break.

Also, I use the pictures for my hunting notes when I return home. It helps me know what the terrain was like, how I shot, how the dog reacted, and other aspects of making me a better dog person. If Jake is having a bad day the camera stays in my shirt pocket and I work on training, but on the days that are going good I enjoy taking pictures almost as much as shooting the gun. The shooting part is more of completing the job and letting Jake get the bird in his mouth if I do it right.

I think Nick was right on.I have days like that too.Sometimes I know I'm not getting a good mount.This happens when I'm tired and also when I carry too much weight in my vest,usually shells..Seems I don't take the time to raise the barrel high enough. taking extra time also allows my pattern to open up a bit as I use a modified. The dogs will just have to cut us a little slack Larry. good luck.

Just started reading your blog and I love it. You tell my story weather its Shooting, Dogs or Birds I'm sure its these Birds that do this to us. I retired several years ago and moved to northern Nevada to be closer to the Chuckar hunting. The other day I took my newest puppy a 1yr old Shorthair out I currently keep 4 dogs 2 shorthairs and 2 Pointers we hunted for about 4 hours. She pointed several coveys and a few split off small groups about 10 times in all I only killed 4 birds. If I miss a couple of birds I start to aim the shotgun and try to judge the lead I know better than to do this and when I get back and think about it I just shake my head.
Jim head down and swing the gun I know this works. Quail used to be my primary birds to hunt and I had better averages they didn't give me the time to think. Thanks Larry now this will be my focus next time out.

Thanks for telling us that you occasionally have a streak of apparently unleaded shells. My last opportunity this year was 4 misses at a large cooperative covey of chukars. All four shots were good chances, all crossing, shots I can make. Felt like tossing the gun at them. Oh well, it was fun to have the chance to shoot. Hope you and your family have a Merry Christmas!