As usual, after a day's hunt and birds cleaned as well as the shotgun, Jake and I relax on the recliner and enjoy whatever might be on the boob tube. The hunting channel just happened to have a show called "Bird dog wars" and I tuned decided to see how Jake and I would compare to these other dogs. 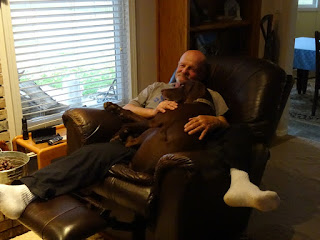 Jake sat on my lap and moaned and groaned. I have to say he sounded a lot like me and I gave him the same sympathy that Barb gives me after a hunt. None. The show was fun and I did see some good points and shooting. The only thing I found disrupting was all the yelling for their dogs to stay, whoa, hurry with the retrieve, and so on. It's a timed event so the yelling does have a purpose. By the end of the show they had the winner. Before you trialers hang me out to dry, I understand the purpose of this trial and the many other trials and competitions beside the just having fun. That's how you get good lines from dogs to sell. I hope I said that right.

Anyhow, by the end of the show, Jake and I decided we wouldn't compete very well with these dogs. First off, if I yelled at Jake, he'd just ignore me and do what he wanted anyhow. Next, this thing about being in a hurry to retrieve the bird to me, well speed doesn't count with Jake. How many times he puts the bird down and readjusts his grip depends on how steep the country is and how many birds he has already retrieved, not to mention that he'll find a trail to side hill back up to me rather than the straight up approach. After I take the bird, he requires help in removing feathers from his mouth before resuming the hunt, The hell with this speed stuff.

He does have a quick speed. after the bird has been delivered and his mouth cleared, he goes mach ten to get three hundred yards away to find the next covey. I'd be timed out before I could even get to his point. Yes, the judge would be impressed with his solid point but if his lungs were burning as bad as mine are by the time I reach Jake's straight up hill point, he wouldn't be capable of writing down a score. 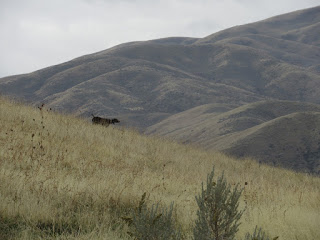 Those blind retrieves a good trainer can make his dog perform are very impractical to Jake and I. It's truly the blind leading the blind. Today I shot a double and crippled both birds. The show Jake put on would amuse any dog trainer. He would catch one cripple and the second bird would start flopping down the hill so he'd drop the bird he had and chase down the second. Then the first bird would start flopping and so he dropped number two and chased back after number one. This went on for two or three minutes and all I could do was sit on the hill and enjoy the show. He finally got the birds to me but wasted a lot of energy getting it done. There were definitely no style points in that retrieve.

Jake also broke a couple of times on running birds. He'd make the point (has to be three seconds on bird dog wars) but would chase the bird as soon as it started running. One of the times I would have gotten the ignorant trainer award for shooting the bird he chased up. Nobody said the hunter had to be smarter than the dog and I definitely am not. I'm just smart enough to wait for Jake to point 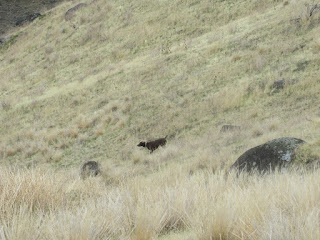 and then I'll move in for a shot.  Sometimes I get lucky and Jake rewards me with a retrieve and I'm top human on the hill for a short time. Then there is the next point and shot which moves me down the ladder a few notches. We'll just keep enjoying these bird dog shows and wish we could do some of the things they do, but consider our score as the number of points and retrieves Jake has in a day and how well I perform behind him. Sometimes, like today, we'll get a high score 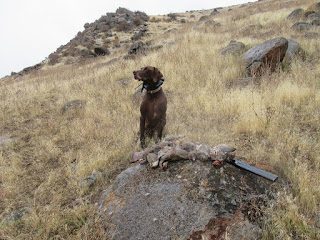 and many times not score so high. Usually that's because of the human equation.
For those interested, we are finding more and more birds each time we go some place. Conditions are perfect right now so get out there with your dog and enjoy.
Posted by larry szurgot at 6:36 PM

Larry,
The couch shot warms my heart! I am a total dog guy and I love how you take care of Jake.
He is one lucky canine!

Have you been finding more birds on your Oregon hunts?

Troy and Rowdy, Jake IS one lucky canine but after days like today I realize how lucky I am to have him. Conner and I had the ultimate hunt today and although Jake had a few let me downs he made the day happen for us.

Casey, although I haven't been back to the places I hunted on opener I am seeing good number of birds in Oregon now. Like in Idaho a lot of them are just late hatches.

Good to hear. We've gone from 80 degrees to snow in a matter of a week, so it should be better from here on out. Thanks for the update.