"Dakota's looking for birds with his old buddies now". Those were the words of Katie Wright last Friday evening. She had been Dakota's vet for 14 and 1/2 years and as always was there for him and us in the end. They were the perfect words to help ease Barb and my tears. In fact Katie had a few tears herself.

Until she said those words, I was thinking about how much I was going to miss him, not how happy he was going to be with his two hunting partners Tucker and Riley. That's where he was the best, when he was on the hill with them. The last two years Dakota's health was slipping and he was unable to hunt any longer. He did well around the house but his enthusiasm diminished significantly. Finally his doggie dementia and lack of comfort did him in. His pain told us we had to let him go.

Barb and I thought letting Dakota go would be easier than when we had to say goodbye to Riley. We were prepared for Dakota, knowing he had lived a long good life. We were wrong, it hurt all the same and a chunk of our heart went with him. We miss him but are better off thinking of the words that Katie said.
Dakota was the middle child. The one that never got the respect he deserved because of the two dogs before and after him. Tucker, his father was the best hunting dog I ever saw and Riley who came along when Dakota was 7 took a close second to Tucker. Even at that, Dakota excelled. He was more than happy to play second fiddle as long as he was in the action, which is where he always was.

Dakota brought home many limits by himself, like this last one. 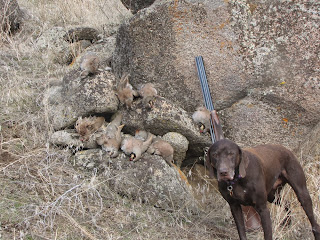 He was successful because of his fantastic stylish points he developed at four months old. 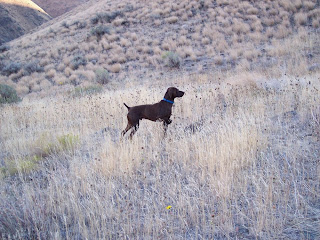 As he aged the tail might have been a little lower but he held the birds for my shot thousands of times. 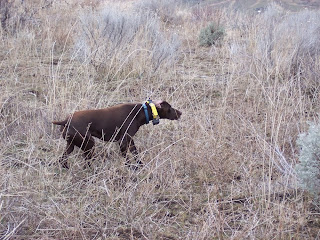 Tucker was always happy to have his son hunting with him and honoring him the way that Dakota always did, 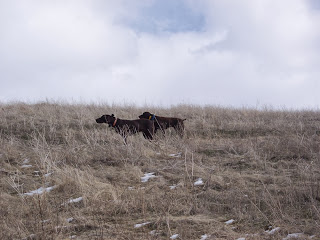 and was always willing to take second place behind Dakota's great points. 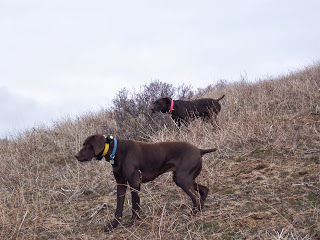 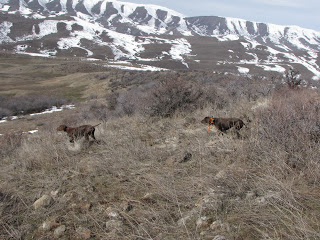 But above all else, Dakota loved the retrieve. He was the most relentless chukar retriever I ever saw. He lost very few birds and both Tucker and Riley were happy to leave that job to him. He showed his excitement of chasing wounded birds down the canyon by barking while in pursuit. It sometimes seemed a little annoying but at least you knew he still was on the bird. He was always proudest handing me a bird. 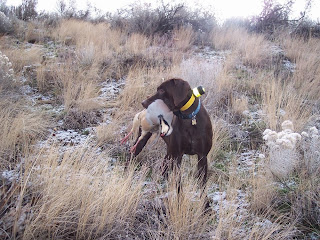 Dakota's most notable moment might be his run in with a cougar. It took a long time to get Dakota to stand here and look at the cat after it was two feet to his rear chasing him just moments before. 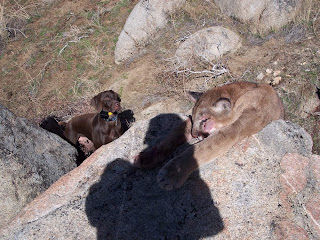 Thank you for giving me the best years of your life Dakota. I hope you are finding the thrill of hunting with Tucker and Riley again as much as it was here. I close my eyes at night and think of the three amigos at night and how much joy  the three of you gave me on the hill and pray that you are together again. Who knows what the three of you have in store when my time comes. I love you.
Posted by larry szurgot at 5:16 PM

They all take a piece of you when they go, luckily what they take isn't nearly as big as what they give.

What great memories you have to cherish. Tough year for you Larry but now you can focus on getting the knee done so You will be able to make those memories with Jake. You have had wonderful dogs and been a good master.well done.