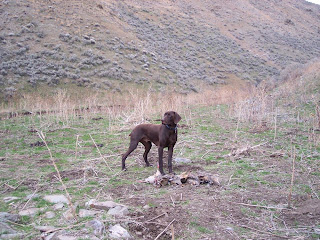 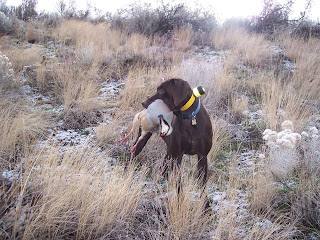 When Tucker was three a good hunting partner of mine, Greg Allen, and I decided to breed Tucker to his bitch Moka. My wife, Barbara, picked our next hunting companion from the liter and named him Dakota. He, too, after about a year became quite a hunter and was soon out pointing chukars. Dakota had a lot of guidance from his dad. Dakota's range wasn't quite as big but he became a relentless retriever. If there was a bird down Dakota would find it. His only real fault was when there was a crippled bird going down a steep hill he would bark with excitement until he finally got the bird in his mouth. I'm sure people thought I was beating my dog. Dakota also some times liked to cheat a little and help me flush the birds. It was a fault I excused because he would always wait until I was ahead of him and than sometimes he just couldn't stand the excitement. Every dog is a little different and Tucker had taught me that if you just trust your dog things will work out in the end. As you can see it usually did. 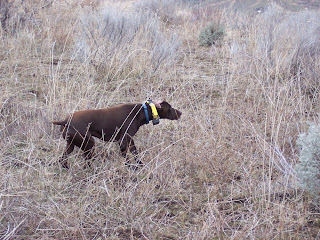 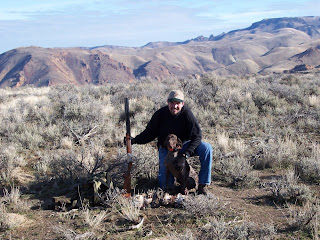