I thought Tucker would be ready to retire 2 years ago so we got a pup from Oklahoma and my grandson named him Riley. I had no idea Tucker had a couple more years in him so when Riley was one I had the same dilema I had when Dakota was one but now I had either three dogs to jockey around or take them all at the same time which is what usually happened. As before it worked out so much better than I expected. All three hunted great together for a year and now Dakota and Riley are a pretty darn good team. Dakota's hips are starting to fail him at 11 years old so he doesn't get as many trips as he used to. About 40 hunting trips a year and another 30 training trips along with our general walks.
Riley is a big dog and covers country like Tucker used to. He is a fireball and will hold birds forever. He retrieves and does everything as well as either of the other two have done and has a goofball of a personality. He's the last dog Tucker will ever get to train. 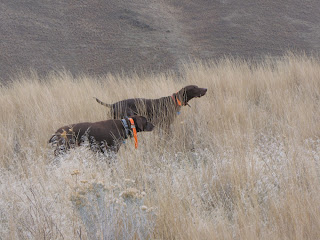