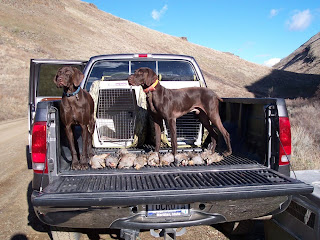 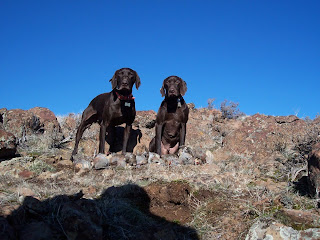 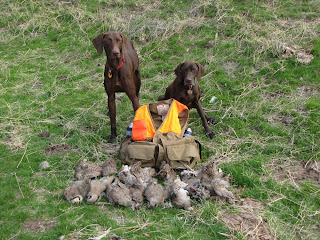 The importance of getting a limit is different to everyone. Some hunters even impose their own limits based on how they feel the bird populations are. I have to admit I do usually hunt for a limit. I don't always get it but hunting for a limit of birds keeps me in the field longer. If I were to come home after just being satisfied I'd turn around after my first point.
Some say it's just the dog work that's important. I agree. But part of dog work is the retrieve and my dog's love to retrieve. I hunt a lot during the chukar season but I also hunt many different locations. I try to not over hunt any location. If I hunt a place and the numbers are low I just don't hunt that area any more that year, knowing that when I go, my goal is a limit and to spend as much time hunting it takes until we are either successful or too tired to keep going.
Saying that, there have been many times when I've come home empty handed and had just as good a time as those when I came home with a limit. It's just my goal is to get a limit. To me it's no different than a golfer whose goal is to shoot even par.
Posted by larry szurgot at 8:26 AM